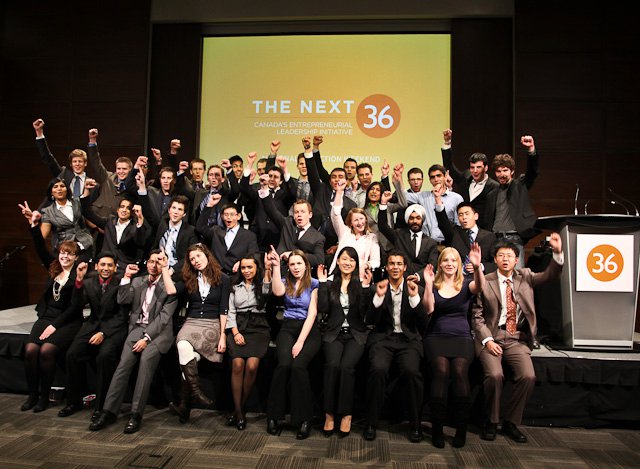 Next 36 mentor Christian Lassonde was pretty blunt on the phone about what he tells a handful of startups from every cohort of the Toronto-based Next 36 program before the annual stroll to New York City.

Last week was the third time he’s lead the charge to the Big Apple, and every time he warns the teams not to expect a cheque.

“The best step in my mind is establishing a friendly contact that will begin to follow you as a venture. They may decide that they may want to participate in your seed round- maybe- but more likely now you’ve created a relationship,” said Lassonde. “Business follows friendships and friendships are based on trust. The earlier you can create a relationship that is based on trustworthiness, the better off you are and the more likely you’ll develop advocates and investors around you. I’m all about building those relationships as fast as possible.”

Five startups from the Next 36’s current cohort visited with four VC firms over the day last Tuesday, those being Interplay, RRE, Greycroft and Raptor.

While the Next 36 has been doing this trip for three years now, it looks like other accelerators in Canada either followed the trend, or felt that they needed to branch out of Canada as well. FounderFuel brings its startups to San Francisco, during every cohort for a combined demoday with SeedCamp and StartMate. Meanwhile last October Marcus Daniels took his first cohort since taking over Toronto’s Extreme Startups to the Big Apple for investor pitches.

Canadian startup accelerators are increasingly emphasizing to their companies that to truly be global they need to actually get down south and talk to US VCs. “While they may be Canadian-domicile, that doesn’t mean they need to be Canadian-only firms, that they really need to look outside of their geographic space to look at competing on a global playing field.”

The teams that went were:

Blynk– Blynk enables every consumer free fashion advice through a fun, simple and addictive platform. Users swipe to like and  dislike outfits, then use stars and crosses to pinpoint specific parts of a photo.
Brizi– Brizi is taking social content up to the space above us, building an aerial drone that audiences can interact with in social spaces, such as conferences, sports games, or trade shows.
Gridcure– GridCure solves the smart-grid analytics issue. Power utilities with smart meters face a 700X increase in data volume from a decade ago, and lack the internal expertise to handle and analyze this information meaningfully.
Onyx Motion– Onyx Motion is creating a smart watch for sports technique feedback. Through motion sensors and efficient gesture recognition software, players receive real-time feedback on their form in a variety of moves, ranging from basketball free-throws, to golf drives, tennis swings, and more.
Sensassure–  Sensassure’s diaper sensor solution for incontinent seniors tracks if they’ve soiled themselves and instantaneously alerts nursing staff when changes are required.
Vokko– Vokko offers a mobile application that enables users to share their thoughts and ideas with other users of their organization anonymously.

For Lassonde, actually spending a day introducing startups to VC firms in-person trumps throwing a demoday and hoping that every investor from out of town will show up. Even then, its a one-way dialogue of startups giving their pitch to an audience of many. Going to New York facilitated direct, one-on-one investor time for the startups.

“The quality of the VCs that you get, in my opinion, are higher. The time spent with them is more valuable and you’re not just pitching them but you’re actually there having a discussion with them and creating a relationship. In my mind as an entrepreneur that’s what I would want,” said Lassonde.