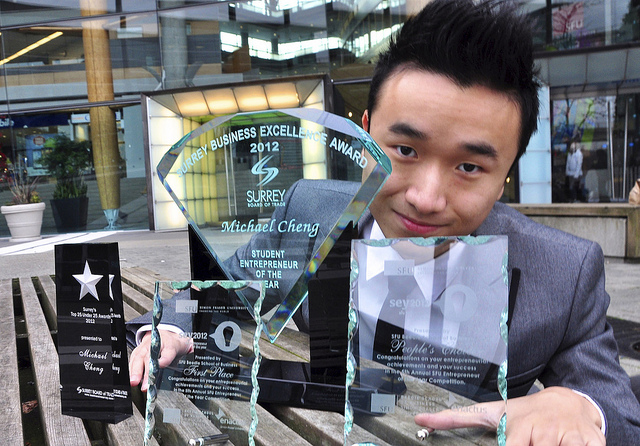 Vancouver 24 Hrs, one of a couple free dailies in Vancouver, has named Next 36 alum and current Needle HR CEO Michael Cheng as one of its “Top 24 Under 24“.

This is either a case of rewarding people for having received past awards, or continuing to recognize a great young Canadian. That’s because Cheng’s list of past accolades is vast: In 2012, he was selected by the Surrey Board of Trade as one of the “Top 25 Under 25” entrepreneurs and was given the Simon Fraser University Entrepreneur of the Year award. 2013 has already proven to be a successful one for Cheng, as in April he was named one of MacLean’s future leaders of Canada. In August he was awarded the Next 36’s Reza Satchu Prize, chosen as the top pupil in the program for young entrepreneurs with freakish potential.

However just five minutes conversation with the confident young entrepreneur gives you the sense that everything he’s been recognized for is completely deserved. It also begs the questions of whether the flurry of awards might end up putting undue pressure on the 23-year-old. Ideally it should all act as continuous motivation for Cheng, who time and time again has had to put on the public-speaking face and convince tons of people to bet on him.

Titles like “Top 24 Under 24” seem but mere monikers or pageview generators. But some of these young people like Cheng really will be looked at as one of the people who will exert tremendous influence on our nation over the next 20 years.

His company, Needle HR, is a talent acquisition platform that helps employers connect with creative talent around the world, like designers, animators, architects, artists, and more. The company claims it’s the world’s largest creative talent pool with candidates across numerous creative sectors from over 190 countries.

When I wrote about them in July, then mentor Dean Hopkins praised the group, including Sean Kim and Christopher Bowal, of having “timed it beautifully as well as having great UI, and some really smart application of the technology.”

“They’ve really blown me away,” Hopkins told me. “They hit a sweet spot in the market, they have a very credible product and I think they’ve got a very fundable team that I think we’ll find over the next few months we’ll have a successful venture backed Canadian success story on our hands.”

Vancouver 24 Hrs also recognized a few other notable “Top 24 Under 24’s” in the “small business advocate”, Chris Peterson. A business administration student, Peterson honed his skills working for a big company, small businesses, and non-profits. He took part in the Vancouver Board of Trade’s Leaders of Tomorrow program, and “until last year he was vice-president of business development for Enactus BCIT, a group offering free courses to small business owners to share such skills as marketing, administration, and infrastructure.”

The daily also recognized a Hootsuite employee as its “social media guru” among the 24. Stephanie Wiriahardja, 24, is HootSuite education community manager and will speak about personal branding this Saturday at Vancouver’s TEDxKids conference. Wiriahardja was also part of a college team which invented a wearable GPS guide for the visually impaired, reported Vancouver 24 Hrs.

What is the future of Canadian AutoTech? (Facebook Live chat)

With evolving consumer expectations on how cars should be purchased, new ideas on car ‘ownership’, and new technology powering these vehicles, it’s clear that…