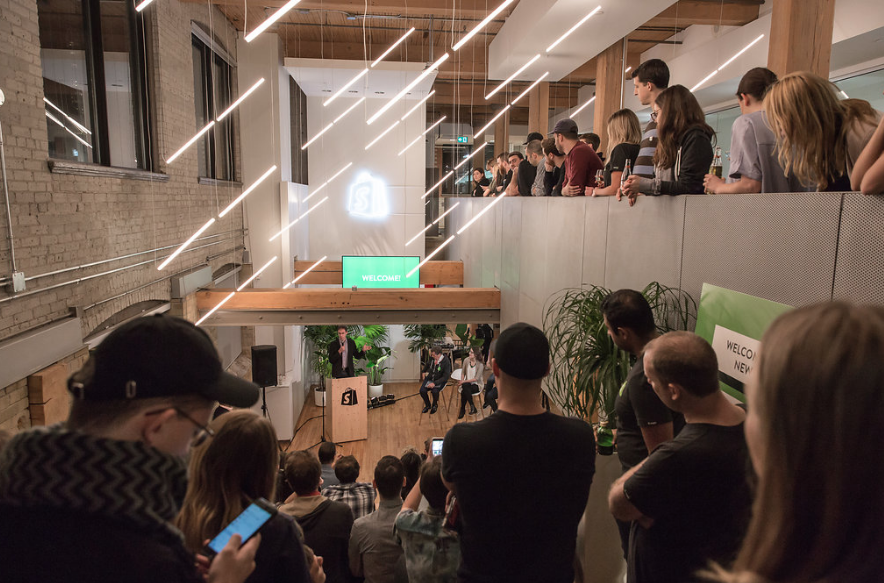 Since filing for IPO just under two years ago, Shopify has shown no signs of slowing down in its mission to dominate ecommerce. Quarter after quarter, the company continues to post impressive results, due in part to an increase in mobile revenue.

Shopify’s revenue growth through mobile has coincided with a growth in assets. The company has made notable acquisitions like Toronto-based Tiny Hearts and virtual marketing assistant Kit, and has opened new offices to specifically support new business verticals.

“Canadians sell companies too early. This is just maddening to me.”
– Tobi Lütke, Shopify CEO

In September, Shopify opened a new Waterloo office focused on its Shopify Plus product, targeted to faster-growing consumers that need enterprise-grade capabilities (Shopify also acquired a Waterloo-based product design and development firm to support this aspect of its business). At the time, the company said that it was looking to hire 200 people at this office.

“These very small businesses were growing really large and not leaving Shopify; that was very insightful to us because it told us that Shopify might be able to stretch out market, not shift up market, but we can also help some of the larger brands,” said Harley Finkelstein, COO of Shopify.

The decision to open separate offices for specific functions seems to be a reflection of its workplace philosophy: that offices should be free to build their own culture, without being beholden to head office expectations of that culture.

“We’re not just building an off-shooter; this is where Shopify Plus was born. It was Waterloo, and this is where Shopify Plus is going to grow to be an incredibly successful business,” said Finkelstein. “What most companies tend to do is create these offices that have interdependencies back to the head office and we believe in being highly aligned. That means that the Montreal team is working on checkout, they don’t need to wait for Toronto; and Toronto is working on growth and product, they don’t have to wait for San Fransisco. It’s important that every single city we’re in, that is the head office of that group.”

While the growth is undoubtedly good for Shopify, Finkelstein added that the startup’s choice to grow local is good for the Canadian ecosystem. In Waterloo, Finkelstein said he heard from Pearl Sullivan, Dean of University of Waterloo Engineering, that students will do internships abroad and then return to those places after graduation.

“We are losing those people,” Finkelstein said. “So if we can provide them with a better alternative — and I think we can offer a better opportunity for these students coming out of university than they can going into the Valley — then everyone’s going to agree to that.”

Shopify isn’t shy about its growth or its build-in-Canada stance — CEO Tobi Lütke says that he hopes the company will act as a roadmap for other Canadian businesses. “One specific issue I have right now is that Canadians sell companies too early. This is just maddening to me, and then I ask why to people who did it. It usually comes down to a lack of self-confidence in what could have become, and they didn’t think they could take it any further. Because there’s not a lot of examples of that happening around them.”

Last week, Shopify hosted the public opening of its R&D centre in Toronto, which will focus on mobile multi-channel experiences, integrating into platforms like Facebook, Pinterest, and Amazon. The company is also exploring how developers can build off of Shopify, and how it can open up its APIs to the community.

Like Finkelstein, Shopify VP of product Satish Kanwar suggested that Shopify is focused on growing with its customers. “It doesn’t change the profile of companies Shopify serves, but it’s about serving them in different ways. So how do we serve all these different stores that work with us online to help them run physical retail offerings?” said Kanwar. “We see that increasingly happening where people start online first, and then inside their hometown they open a store, or travel and do popups to connect with their customers. And that’s where Shopify POS comes in.”

When asked if there was any event in particular that pushed the company to open an R&D centre in Toronto, Kanwar said they quite simply ran out of desks. “There’s an amazing group of creative and innovative people inside of the city, and as Shopify has grown in terms of merchant reach and business size, we’ve grown in cities where we can capture the best people.”

In addition to the R&D centre, Shopify anticipates more growth: the company is the main tenant of Toronto’s King-Portland centre set to open in 2019, leasing 112,000 square feet.

“I certainly hope Shopify is nothing terribly special,” said Lütke. “I hope it’s representative of what is coming in the tech industry of Canada. That’s how I’d like to think, but in the meantime, until everyone catches up, we’d be happy to share what we know.”