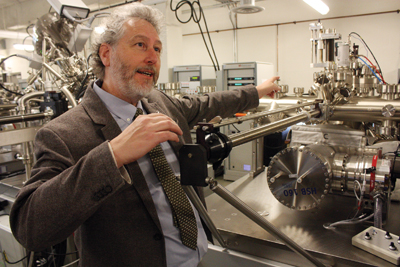 The Institute for Quantum Computing (IQC) at the University of Waterloo has unveiled one really expensive device according to a report in the Waterloo Chronicle. A $5 million dollar machine capable of building quantum components has brought the university closer to building a quantum computer.

But Waterloo’s new toy apparently “grows” new materials, forming the building blocks of new quantum technologies one atom at a time. It was built by Omicron Instruments, featuring an ultra-high vacuum and multi-chamber design to build high-quality films and layered structures, which are also frequently found computer chips to micro sensors.

The IQC’s deputy director of reseach David Cory told the Chronicle that the tool will “revolutionize” their program. “We can do things today, in our own lab, with our own controls, that we could only dream about in the past,” Cory told the Waterloo newspaper. “To have a system that has built into it this kind of complexity is the only one I know of. A year from now you won’t be able to say that.”

IQC director Raymond Laflamme added that the acquisition of the tool is both a milestone for the institute and a “turning point” for quantum devices, which have the potential to revolutionize society.

He further said that the devices, which many hope to be common place in homes (a hope that’s still years away), will impact every part of our lives.

Interestingly, the Chronicle wrote that the $5 million device actually have to be shipped in two parts, as it couldn’t fit on Omicron’s assembly lines in Germany.

Photo by James Jackson for the Waterloo Chronicle