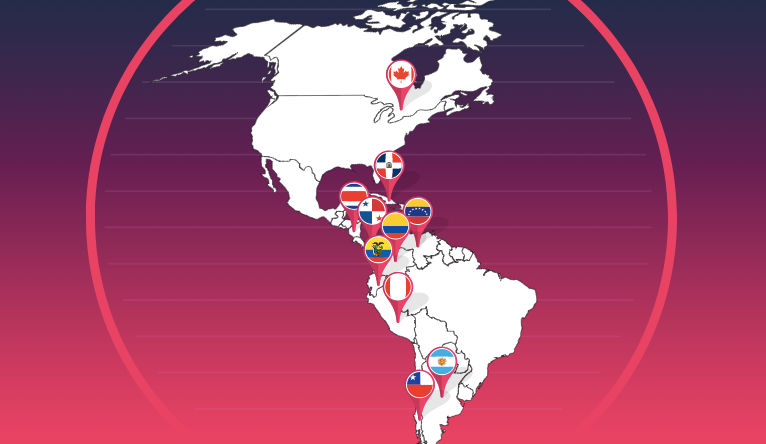 Nekso is a ride-hailing service that integrates taxi lines, passengers, and drivers into one unified app. Operating under Toronto-based parent company BlancLink, and developed by its web and mobile development consultancy, Blanc Labs, Nekso made an interesting launch decision: ignore the North American market completely and choose Venezuela instead. BetaKit profiled Nekso CEO and founder Hamid Akbari’s decision to prioritize Latin and South America as a launch destination for its service November of last year.

This November, Nekso announced its intention to launch in Canada and the U.S. in 2018 (6 Canadian cities are planned for early in the year; Nekso currently has no target U.S. launch date). To fuel that expansion, the company is hoping to close a $25 million USD funding round.

Under embargo, BetaKit received a press release regarding Nekso’s North American launch plans, as well as an invite to the company’s launch party, which was held last night at Toronto restaurant Baro (disclosure: two different PR companies were involved in supporting the launch, Leap PR and Eighty-Eight. The latter company is run by Erin Bury, who is BetaKit’s original Managing Editor. She also appears regularly on BetaKit’s CanCon podcast). The release stated not only Nekso’s intention to raise a $25 million USD funding round, but that the company had already closed $5 million USD in funding from Extreme Venture Partners (EVP), who would be leading the round, adding to Nekso’s $6.5 million in funding raised since the company’s launch.

A portion of the (first) Nekso press release provided to BetaKit.

$5 million USD is a fairly large cheque to cut on one investment, and BetaKit had received indications from multiple sources within the Toronto startup community that EVP had recently closed a fund in the $8-10 million range, which would make this a significantly large investment for an institutional investor to make in one round of funding. After confirming with Nekso’s PR that the funding was both closed and $5 million USD rather than CAD, BetaKit reached out to EVP CEO and founder, Ray Sharma, who was offered as a quote in the release.

Over email, Sharma did not confirm nor deny the recent fund close, and stated he was not the lead partner on the investment. However, he did offer an explanation as to how EVP has done deals in the past. BetaKit has pasted this section of the email verbatim below:

“FYI we have done deals where are [sic] limited partners amplify the amount of capital that we deploy. For example with Crowdcare (aka Wysdom) we put in approx $500k ourselves early and then our LP investors put in another 2x that approx (give or take). Sometimes like in this example we control the votes via a trust but we will only show up on the cap table for our direct interest. Sometimes after we intro an LP into one round they will follow on etc.”

What Sharma is essentially describing is a syndicate model, with EVP acting as the lead. Syndicates are generally private, which explains why EVP would be presented as the primary investor despite contributing only a portion of the funds.

Sharma offered to pass along BetaKit’s questions to the lead on the Nekso investment, Imran Bashir, EVP’s Managing Partner.

To clarify, Nekso has closed no additional funding beyond the $6.5 million it already had in July before attempting to make this announcement. All that it currently has from EVP is a commitment.

BetaKit then received word from Nekso PR that the embargo had been pushed due to last minute adjustments in the funding announcement. The new target date was set for today, November 2nd. BetaKit was told Nekso and EVP leadership were still unavailable to speak with the publication directly.

Yesterday, BetaKit received an updated press release. For those not familiar with the inside baseball of tech media, this occasionally happens; typos are corrected, quotes are added or removed, additional context might be added based upon journalists’ questions about the first release. It’s not common, but it’s not unfamiliar.

The changes in the second release BetaKit received were significant.

A request was immediately placed by BetaKit to explain the disappearance of EVP’s funding (which had previously been confirmed to BetaKit as closed), and additional detail on the new $6.5 million amount.

A quick check of Nekso on CrunchBase shows that the company has raised approximately $6.5 million USD in funding. However, that funding total contains investments which go back as far as December 2015 (per CrunchBase). Only $3.8 million USD of that funding came in 2017. Importantly, the only named funder listed on the page is EVP, for an undisclosed amount from September of this year (see images below).

BetaKit received an update late last night from Nekso in response to our questions containing two important new pieces of information: the $6.5 million USD listed on CrunchBase (referred to in the first release as past funding) was now what Nekso was announcing in the new release; the $5 million USD funding amount from EVP was not closed, but now a funding commitment.

To clarify, Nekso has closed no additional funding beyond the $6.5 million it already had in July before attempting to make this announcement. All that it currently has from EVP is a commitment.

BetaKit has made several attempts to confirm exactly who was responsible for the $6.5 million in historical funding, but Nekso would only confirm that EVP and Claudia Cisneros (a Peruvian, investor, journalist and political activist) have invested. The company said it would have to check with the other investors before disclosing.

Early this morning, BetaKit received an additional statement from EVP, which is pasted in its entirety below:

“We were an early investor in Nekso; we believe in the company and are excited to be a part of their new funding round. We are committed to putting $5 million into their new round, raised through a syndicated of investors who are equally impressed with what Nekso has built and are eager to help the company launch in North America. There was a miscommunication on whether the money is in the bank vs. committed or allocated, and so we issued a corrected release to accurately and transparently reflect our role along with our other investors.”

A deal isn’t done until the money is in the bank. The bar must be higher for Canadian innovation stories that involve millions of dollars.

It is entirely possible that no one from EVP saw Nekso’s original release before it was sent out, and quickly moved to correct the information following BetaKit’s questioning (notably, Leap PR is also EVP’s media agency). Speaking with many VCs over the years, and having covered many release announcements, BetaKit can attest to the fact that oftentimes the quotes in a release are not drafted by those they are attributed to, or possibly even approved by them.

However, press releases are not drafted in a vacuum. The core information contained in a release, the very thing being announced, comes from the principle, which in this case, would be Nekso. PR agencies also don’t send out releases until they are approved by someone at the principle, especially prior to a major funding announcement or international launch. Oftentimes, legal review and approval are required. PR agencies do not go rogue; they help craft the message, they do not make it up.

Why does this matter? Because Nekso really wants to close a $25 million USD round. The company’s announcement is not only a statement of intent, but part of a strategy to raise awareness and help close that funding. Nekso’s event last night, held jointly with EVP, was not only intended to celebrate the company’s impending Canadian launch, but to persuade investors attending into joining the round (or EVP’s syndicate commitment perhaps). Launch events are an attempt to not only demonstrate traction, but momentum.

Nekso’s (continually revised) story matters because those potential investors should have a clear understanding of whether or not that momentum is real. They should know whether or not $5 million in funding to lead a round they might jump in on is closed or committed. They should know whether $6.5 million in closed funding is part of the current round or money raised 1-2 years ago.

This story also matters because every entrepreneur should know that a deal isn’t done until the money is in the bank. It is also the responsibility of every founder and CEO to never (intentionally or unintentionally) mislead potential investors on the state of their business. The bar must be higher for Canadian innovation stories that involve millions of dollars.

This article has been updated to clarify Nekso’s current funding total and relationship with EVP.

Toronto-based mobile studio Tiny Hearts has been acquired by Shopify. It’s the second acquisition for Shopify in just over two months; in October, the…