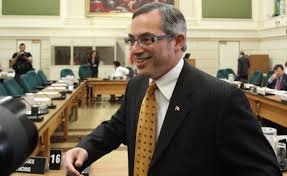 Tony Clement has made a name for himself as Canada’s “techie” MP over the years, from supporting the granting of wireless spectrum to smaller carriers, to helping smaller Internet Service Providers save a bit of cash from their CRTC-issued broadband bills. Utltimately he’s made efforts to lower prices for Internet and wireless consumers in this country.

In front of students and innovators at the University of Toronto campus today, Clement announced his support for the Great Canadian Appathon (GCA), now in its fourth year. He also announced plans for a new “national” Open Data Appathon, which will “bring the high tech community together and celebrate Canadian entrepreneurship and innovation.”

“We are planning to support a national Open Data Appathon,” said Clement. “Our Government believes that Open Data is one of the new, great resources of the 21st century, and it is part of our commitment to be at the forefront of a movement that is spreading around the world. I look forward to seeing what open data enthusiasts will come up with for both these challenges.”

In supporting the new national Open Data Appathon, “likely early in the new year,” the Government wants to encourage participation among Open Data enthusiasts or beginners. Both rookies and those experienced with open data are invited to explore the data found on data.gc.ca to create innovative new products and ideas.

Ray Sharma of XMG Studio referenced tech innovation like instant messaging, gesture control and 3D graphics in lauding the work of game developers and designers. “As the largest annual competitive hackathon in Canada, the GCA attracts this exceptional talent, and we hope the crème-de-la-crop will also be there to supercharge and guarantee exceptional results for appathons to come,” said the president of the award-winning Canadian mobile games shop behind the GCA.

Meanwhile, the University of Toronto’s Sven Dickinson reminded people that U of T has supported the Great Canadian Appathon since its beginnings four years ago. “The University of Toronto remains on the leading edge of technology innovation,” said the Chair of the Department of Computer Science. “We are inspired by the work our students can produce, and are excited to see what they, and other students across the country, will bring to the fourth year of the GCA, and the upcoming national Open Data Appathon.”

Vancouver-based fitness tech startup Trainerize has been acquired by ABC Financial, a United States-based software provider for the fitness industry. The purchase price of…