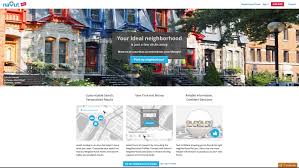 Montreal-based Navut is all set to pitch their idea to CBC’s Dragons’ Den.

It’s not the usual kind of pitch the Dragons get to see, and especially now that well-known digital Dragon Bruce Croxon is gone, it might be hard to float the dragon boat. (Truly horrendous pun, I know, don’t judge me).

But as we all know, a useful web startup with big user potential can tickle any investor’s fancy, and Navut might be on to something.

As marketing coordinator Grace Mitchell told us, the company created a web platform that acts as a one-stop solution for people who are moving to a new city, but don’t know much about it. Navut’s cofounders, three Brazilians and one Filipino who all immigrated to Montreal, created an algorithm that allows users to input facts about their lives, how much money they make, what type of amenities they need, how they get to work, if they need schools for their children, what languages they speak and more. The site provides a map where they’ll see neighbourhood suggestions based on how they live their lives.

Users can then see all the properties in the desired areas currently for rent, and Navut will connect them directly with realtors, property managers or landlords. Home-seekers get to find a place that’s perfect for them and property managers get to access a collection of motivated users who are ready to rent. The startup takes about $5 to $10 off of every “connection” through agreements with realtors and managers.

“It was founded by people who immigrated to Canada in the past seven years, who didn’t know anyone here, had no idea what they were doing and they all ended up living in neighbourhoods that were too expensive or weren’t a good fit,” said Mitchell. “So they wanted to create a solution for those situation. It’s for expats, immigrants, or anyone who doesn’t have friends who could tell them all that info.”

On top of places to live, the site will eventually provide information on local amenities like cable and Internet options, restaurants, bars and anything in between.

Searching a random area really reveals the hidden gem in Navut’s web app. I searched Montreal’s Mount-Royal neighbourhood, and the site reveals all kinds of cool information on demographics and services. On top of a map, it shows housing statistics like population growth, population density, proportion of properties that are owned, and even property by type. Average family income, unemployment rate and percentage of people with a university degree is revealed as well.

Cultural diversity stats are available too, as well as top industries and top occupations in the area. It really is a detailed look at whatever neighbourhood people might envision themselves moving into. For each neighbourhood, users will see probably the two most important stats: “neighbours you’ll find:” and “look somewhere else for:” (In Mount-Royal its “families with babies”, “young couples” and “young families”).

Navut’s pitch to the dragons comes next week, but if they make it on television it’ll be a while until we see the episode. Hopefully they get the momentary PR blast that a cameo on the popular show brings, to bump their monthly hits up from about 6,000 currently. Like many startups, Mitchell said the exposure is more important right now than any deal that might be made.

The company is about to upload 150,000 new rental properties, which should bode well with the users they’re targeting. Mitchell said ultimately the site wants to help the young family-type people who need to find a good fit in a new city.

“The best thing we can hear right now from users is the reason why we started it: how much easier it would have been with this application,” said Mitchell. “When you’re moving with your family it’s not just you and there’s so many other things to think about in terms of financials and education, being able to figure out where you can live and where your kids will be safe and happy. It’s trusted data.”

Google doesn’t do anything on a small scale. While having a mayor cut a ribbon is great, Google opened their new 185,000 square foot…