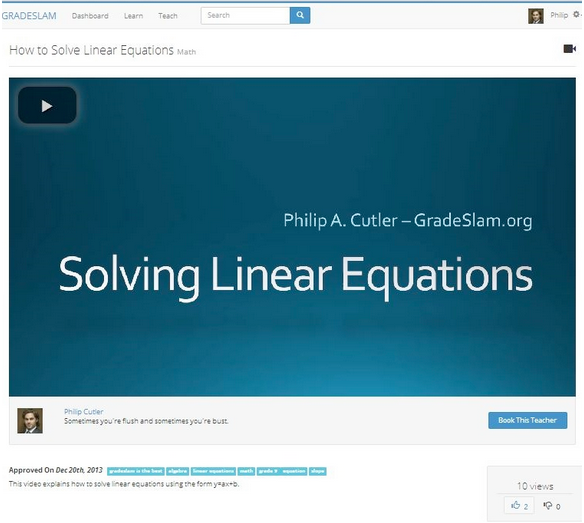 Phillip Cutler started GradeSlam while juggling an education degree at McGill University and playing for the varsity football team.

Before that his teachers heavily encouraged him to get out into the community and get teaching experience (which he did). Evidently though, the flexibility and drive towards creating a business appealed to him more.

GradeSlam is a Montreal-based edtech startup that initially started out as a tutor matchmaking platform, where parents could browse through tutor profiles (with uploaded tutorial videos) and choose which one might be right for their child. The tutors form lesson plans around what the student needs help in and what they’re studying in school, and not by a prescribed curriculum like large tutoring institutions.

Tutors can charge whatever they want (typically between $20-$60 per hour) and offer flexibility in terms of coming to students houses.

GradeSlam began with just one person, Cutler, in one market, Montreal. It has now expanded to dozens of tutors helping hundreds of students in six provinces across Canada.

But now it looks like the startup is focusing much of their efforts on a new, online tutoring platform, presumably via  a mix of video chat with turors and online tutorials and resources. It’s an opportunity for tutors to reach students anywhere in Canada (and the world). The platform reveals who the more experienced and higher-grossing tutors are, via the number of hours completed, and its a good way to get those better teachers in front of students who live far away.

In that pursuit, the company recently completed an unsuccessful Indiegogo campaign to help launch the new focus. It was only unsuccessful in terms of not being able to hit its funding goal, but given the company’s recurring revenue from several tutors, Cutler said he see’s a cash-flow positive future in a few months anyways.

It described how it wants to be a “Khan Academy with thousands of Khans,” where students anywhere with access to a computer and an internet connection will have access thousands of free, curriculum aligned tutorial videos and resources contributed by thousands of certified educators.

Regardless of the success of the online pursuits, it looks like the startup already has a good reputation and a strong value-propostion for in-person learning in Canada, which I personally believe will always trump any online offerings.