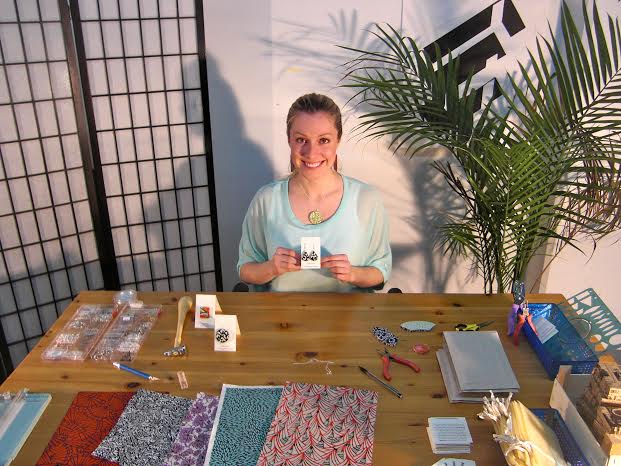 Montrealer Anna Van Tuinen had always designed and created paper jewelry figures since she was in high school, but any thought of making a business of it would have to come after retirement from her job as a speech pathologist.

After a bit of encouragement from a business mentor as well as reading the book “Lifestyle Entrepreneur” by Jesse Krieger, the 25-year-old “took the plunge”. In one day she created a simple online shop on Canadian ecommerce software platform Shopify. Six weeks later she had sold over $12,000 worth of her “Paper Anniversary” paper jewelry.

“I thought of the idea just to market just to men on their one year anniversary, because traditionally you’re supposed to give a gift made of paper, and I received a lot of positive feedback,” said Van Tuinen.

Based in Montreal’s Mile End neighbourhood, Paper Anniversary is a shop that creates “paper jewelry to make women smile.” Each piece of jewelry is handmade by Van Tuinen, who came to Montreal three years ago to study at McGill University. The online shop offers earrings, necklaces, 15% off gift sets and best sellers on the site. Van Tuinen said the average piece of jewelry goes for around $100.

What immediately struck me was how little the pieces actually look like they’re made of paper, which apparently Van Tuinen hears all the time from clients.

With Paper Anniversary going so well Van Tuinen shortened her Speech Pathology career to two days a week private practise and is now looking to bring on an extra hand to help with production. The entrepreneurship bug seems to have bitten her.

Paper Anniversary officially launched at the end of October and particularly around the Christmas season, Van Tuinen received so many orders that she joked about needing a “pause” button on her Shopify platform. For that reason the new entrepreneur is currently building a stock-pile of jewelry and exploring options to facilitate easier and faster shipping from US destinations. (To no one’s surprise, she revealed that men searching for that perfect one-year wedding anniversary gift tend to get it done last-minute).

On launching an ecommerce play in Montreal, Van Tuinen also emphasized how much help the community has offered her. Whether it was marketing, graphic design or simple brain storming, she said her peers around her were invaluable.