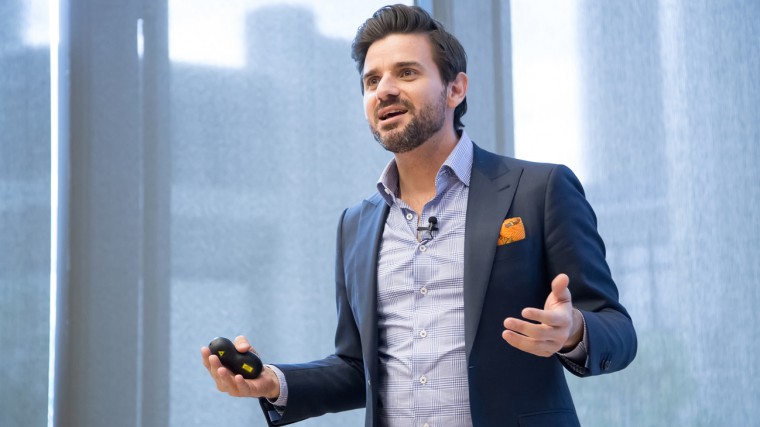 As part of a regular series powered by Dell, BetaKit asks prominent entrepreneurs to share how technology has evolved since they first launched their business, before predicting where it will take them.

A millionaire by the time he was 25, Michael Hyatt learned at an early age how to build a successful business. Following his second exit with BlueCat Networks, Hyatt is now in the business of sharing his lessons from the early days and investing in the future as a Next Gen Den Dragon.

What technology were you using regularly at the beginning of your business?

When I started my company in the mid-1990s, the only technology we had was a phone line and a fax machine. These were the weapons of business at the time, and if you wanted more you had to spend a lot of money.

We had computers that we used to develop the software we sold, but when we acquired a new client we had to mail them a disk with the software on it so they could install it – the cloud was not a thing at the time.

By about 1997, when the internet started to become a thing, we began to use email, but that created new problems around the speed of internet (we had dial-up), bandwidth, and the cost of internet connections on top of phone and fax connections.

What were some of the biggest struggles in the early days?

The biggest struggles for me and my business were getting our name out there and overcoming our geography.

“When I started my business, being an entrepreneur was not considered a career path in Toronto – most people assumed you couldn’t find a job.”

When I started my business, being an entrepreneur was not considered a career path in Toronto – most people assumed you went that route because you couldn’t find a job. Because we didn’t have social media, meetups, and other ecosystem networks, I had a really hard time getting our name out there and finding potential customers and investors.

We cold-called and did our best to make sales, but we faced another challenge: American businesses were wary of doing business with a company out of Toronto.

We are now seeing Toronto as a global tech hub that people are excited to do business from and with, but back then people were not as friendly about the fact that you were Canadian.

The other major factor was cost. Everything was so expensive back then, and not even just technology. For instance, the only way to find office space was to sign a multi-year lease with expensive minimum monthly payments. Banks didn’t help you, so up-front costs were a big problem.

Are there tools or support systems available now that you wish you’d had then?

Thinking back on the challenges we faced, cloud technology is the biggest thing that would have helped us.

With cloud computing, we could have sent our software to customers seamlessly and been able to demo it through screen-sharing. In the beginning, we had to mail them a disk and then talk them through using it on the phone. We couldn’t see the screen, so we’d be blind on the other side of the phone as we tried to explain which button to click in which order.

These kinds of things would have added a huge layer of simplicity, since the cloud would have brought efficiency and data storage into technology companies that couldn’t afford to fly on-premise for every installation.

Is there any advice you’d want to give to your past self?

The biggest mistake I ever made was hiring the wrong people.

Thankfully, I also hired amazing people that far outweighed the bad hires, but the bad ones held us back.

I’d find someone with an amazing resume, but there was a gut feeling that said they wouldn’t have fit in with the organization. I’d ignore that red flag and hire the person anyway because they were perfect on paper.

The same thing happened every time – they were smart, but inevitably a bad cultural fit.

Looking back, I’d tell myself to invest in HR, even as a small business – both hiring an HR team and caring about it myself. I’d also tell myself to realize that HR is just as important as sales no matter what size you are, not only to have an objective process for hiring (and firing), but also building your culture.

What do you think is the next big trend in technology and how will it impact the way we work?

I think the four next big trends are AI, cryptocurrency, quantum computing, and data security – and they will all impact the way we work.

“If you’re so focused on selling that everything else takes a back seat, you might be setting yourself up for a lot of problems with talent. Hiring the wrong person is expensive.”

If you’re building a company now, these technologies will be able to handle a lot of the backend processes that used to take human effort. This means that starting a business will not only become much cheaper but you will be able to focus more on solving bigger problems.

I believe that small business owners need to learn more about these technologies and how they will integrate, or disrupt, your business. If you learn about and embrace these technologies now, then you can get ahead of the curve and build a really successful company.

I think the future of work will also be more flexible. When I was starting out, roles were rigid and you had to be in large, urban centres to be successful.

Given the changes we’re seeing in what technology is able to do for us, we will be able to work in different timezones, small towns, and see the rise of certain areas becoming known because of the people there, not for natural resources.

From fax machines to machine learning, the tools of business have evolved. But embracing new technology allows entrepreneurs to stay competitive when growing their small business. Dell has the right tech to fit your work, for today and tomorrow.

Montreal-based FinTech startup Mylo has raised $10 million in Series A financing for its saving and investing platform, in a round that saw a…