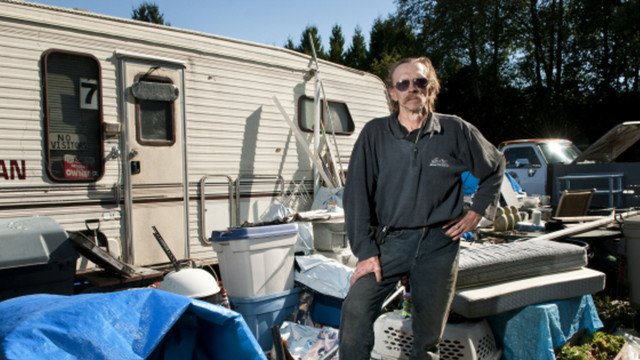 It was a contentious topic in journalism school a few years ago when my classmates and I had to debate the merits of “embedded journalism,” which traditionally refers to news reporters being attached to military units involved in armed conflicts.

But the subject extended to the topic of the limits of the reporter-subject relationship. How much distance should journalists keep from the humans they write about in an effort to remain objective? At what point do journalists step in to help in situations that any reasonable person should assist in?

It appears that the reporters at Metro News Vancouver dismissed the notion of reporter distance this week in an effort to help a distraught trailer park resident in Surrey, BC.  The daily news outlet helped initiate a crowdfunding campaign via FundRazr for Stephen Chalmers, one of the more unfortunate residents who’s life had been turned upside-down after a contractor accidentally knocked out power to a Surrey trailer park. The move left residents without running water or electricity. As of Thursday of last week, four weeks had gone by since residents had been suffering.

According to reporter Kate Webb, as far back as October 3rd residents were living in “hell”, after the city of Surrey ordered the owner of the violence and drug-ridden Beladean Motel (which is located in the trailer park) to demolish the building or face fines of up to $10,000. The owner agreed, but on September 14 the demolition crew knocked the power out to the trailer park, where 11 people are still living.

A few more stories surfaced since, detailing how a few generators and not enough gas was provided for the residents, who then had to pool their money for enough gas to live off of. It was also reported that “A WorkSafeBC investigation found that the owner, K.B. Properties, failed to hire a health and safety coordinator for the demolition of the motel, resulting in unsafe asbestos removal as well as the power outage.”

Chalmers was portrayed as one of the more highly impacted residents, and as a result, the news outlet helped create the crowdfunding campaign with Chalmers’ sister, A new mobile home and a new life for Stephen. In three days the goal of raising $5000 for a new trailer had been met. Chalmers’ sister and Metro News Vancouver decided to push the limit to $10,000, and so far $5,740 had been raised.

Chalmers emphasized that the other residents faced uncertainty as well. “I really need everybody to help them, too,” he told Metro News Vancouver.

At times journalism unfortunately likes to focus on single characters in its pursuit to tell a story, and the fact remains that 10 other residents aren’t exactly living it up these days.

I commend the news outlet on stepping in and assisting in this case. It might not be the equivalent of assisting rebel soldiers in Syria while innocent women and children are attacked with chemical weapons, but it also likely wasn’t an easy decision to risk objectivity in helping. Metro News Vancouver made the right decision to help someone who needed helping, and I’m sure FundRazr was only happy to act as the platform that enabled that.

Let’s hope the rest of the residents get their power running quickly, or at the very least, several functioning generators.