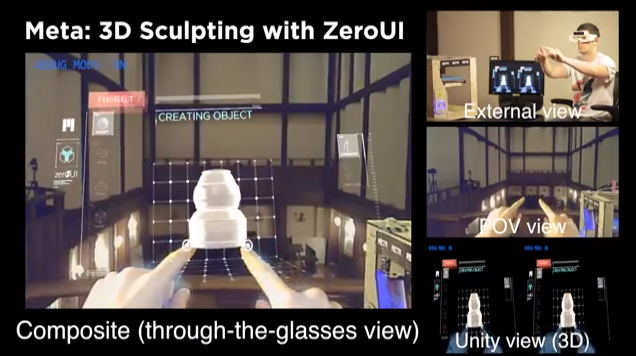 Meta SpaceGlasses have the potential to be a game changing wearable. We first introduced this device back in August when the team behind “the most advanced augmented reality glasses” were taking pre-orders based mostly on a concept video. The video more than satisfied our burning desire to interact with computers in a way we had previously only seen in movies like Iron Man and Minority Report. But it also left a lot of skeptics as to whether Meta could deliver.

Meta’s latest video shows an actual device in action. A user wearing a pair of Meta 0.1, the Developer Edition, demos one of the most memorable features from the popular concept video which went viral this past summer – sculpting a 3D object using augmented reality.  This new video shows a user sculpting a 3D object with their fingers and then dragging the completed virtual object over to a 3D printer to start to print.

The technical demonstration showcases the device’s depth-sensing cameras and gesture recognition algorithms which can track hands and fingers to manipulate objects that only the wearer can see as an augmented reality through Meta’s lenses. More importantly it shows that Meta intends to deliver on the futuristic capabilities of its device to dispel any worries about it falling into vaporware.

To continue in this vein, Meta has also set up a golden ticket invite program which brings handpicked companies to the Meta mansion in Silicon Valley to check out the technology and begin to collaborate with the team. Meta told us that they expect about sixty companies to visit over the next couple of months as part of this program.

But it should come as no surprise that Meta is starting to bring to life the dream they promised of a holographic world. The team at Meta is stacked with wearable tech and augmented reality experts. The company’s Chief Scientist is Steven Mann, a University of Toronto professor who invented wearable computing thirty years ago. Meta’s CTO, Raymond Lo, is also a Toronto-native who studied under Steve Mann at his prestigious wearable computing lab. And Meta’s lead advisor is Steven Feiner, a professor at Columbia University who is a pioneer and a world renowned expert in AR.

The Developer edition shown in this recent video isn’t the most appealing looking pair of glasses, but this video isn’t about fashion it is about proving the technical strengths of the device. And the more fashionable device is coming. Meta is continuing to take pre-orders for the Meta Pro which refines the functionality and design of the developer unit, making it much more palatable for the masses.

Meta has confirmed that the Meta 0.1 Developer units are on track to ship this May. The first batch of Meta Pro devices, which retail for over $3,650 USD, is expected to ship in July/August of this year.