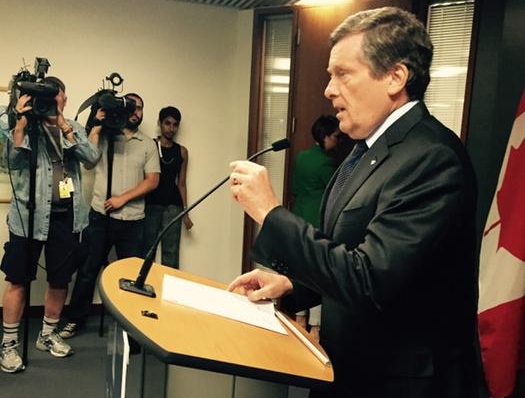 Toronto Mayor John Tory called a press briefing this morning following Friday’s decision by the Ontario Superior Court dismissing Toronto’s request for an injunction against Uber. The judge in that case ruled the City of Toronto had failed to demonstrate a breach by Uber of its by-laws.

680 News is reporting that during the briefing, Mayor Tory called for Toronto City Council to revise current by-laws to encapsulate both city taxi services and Uber. “What we need is one by-law that applies to everybody,” Tory said, arguing that the current by-laws do not create a level playing field for current cab drivers. Tory hopes to have the new by-law before Council by this fall.

Mayor Tory also stated that he would not allow the city’s taxi services to disrupt the Pan Am Games, as has been recently threatened, saying there would be “some level of enforcement” for Uber and cab drivers during the games.

Tory claimed that finding common ground between the two groups is a “very big, challenging task,” but hoped that his recent meeting between Uber and city taxi reps would be the first of many to come.