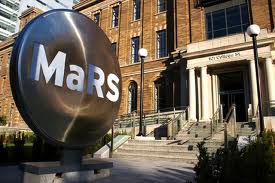 “It’s another blatant attempt to hide it all from the taxpayers and the legislature,” former Progressive Conservative MPP Frank Klees told reporters this morning.

The Progressive Conservatives have obtained documents that say Kathleen Wynne’s Liberal government secretly approved a $317 million bailout of the huge tech startup and “innovation” centre, the MaRS Discovery District. Not only did the Ontario premier fail to put the publicly-funded expenditure on the books, but documents obtained by the Progressive Conservatives say MaRS can’t afford to pay it back.

The MaRS Discovery District is a publicly and privately funded “innovation centre” in the old Toronto General Hospital buildings in downtown Toronto at College and University streets.  Its broad mandate of spurring innovation focuses itself through “an extensive network of partners to help entrepreneurs launch and grow the innovative companies that are building our future”. There, it fully or partly funds sectors such as the JOLT startup accelerator program, which is partly backed by MaRS Ventures, the MaRS Investment Accelerator Fund, MaRS Information and Communication Technology, MaRS Cleantech, MaRS Health and more.

Nearly every Canadian news outlet reported on the story this morning, which the Tim Hudak-led PC’s are alleging is just one more example of Wynne’s irresponsible use of taxpayer money.

The Former PC MPP Klees held a conference call this morning with reports, saying he obtained the documents from a whistle-blower.

The Treasury Board document dated May 13, 2014, as the Toronto Star reported, shows a request from the Ministry of Research and Innovation and the Ministry of Infrastructure to approve funding for the purchase of interests in the MaRS Discovery District and MaRS Phase 2 Inc.

“The documents show that Infrastructure Ontario was in negotiations with Alexandria Real Estate, the private company developing the MaRS Discovery District, to purchase the interest in the 72,000-square metre MaRS Phase 2 building and lands for $65 million.

The ministries recommended purchasing the building to protect the provincial government’s investments in the project to date, and to minimize risk associated with the project.

The purchase price would bring total government investment in the MaRS project to $317 million – including a 2011 repayable loan from Infrastructure Ontario.”

MaRS had already inked a $344.5 million expansion, dating back to 2011 when the government announced it. Part of the deal was a$234 million loan from Infrastructure Ontario. The problem is that MaRS was supposed to pay it back over using rental income from tenants in the new building.

However, The Star reports that a “former MaRS senior executive” told the newspaper that the organization has been having trouble renting the new office and lab space to private-sector tenants, and it can’t keep up with the loan payments.

“Just take a look at the building. Do you see any trucks outside loading and unloading? Do you see anyone in the windows, using the offices?” the insider told the Star.

Klees, meanwhile told reporters that ““They’ve been in default for months and the government is now using tax dollars to secretly bail them out, and the reason is obvious: they want to avoid the political embarrassment of having this deal come down around them.”

“These documents read like a repeat of the Ornge documents that were sent to me by whistleblowers who could no longer stand the corruption that was going on there,” he told the Globe and Mail.

“The project was a failure from the outset,” he said. “They paid too much for the property and for the construction, but now it’s the taxpayers of this province who will pick up another $300-million plus liability – all due to the lack of oversight, the mismanagement on the part of this government.”

As BetaKit reported last month, Between 2002 and 2008 MaRS had already received $130 million in public subsidies. Places like Silicon Valley, the tech startup mecca which Canadian startup communities like Toronto routinely try to emulate, have historically received little (if any) public money from the state of California.

In 2013′s “Sunshine List” of public sector employees who made at least $100,000, 42 employees at MaRS made the cut, including five within the MaRS Investment Accelerator Fund. Most prominent among those salaries was the nearly million dollars paid to MaRS’ top three earning employees. MaRS CEO Ilse Treurnicht took home $532,500 in 2013.

MaRS said on its website that its initial investment of $600 million “has already driven more than $2 billion in economic value.”

MaRS isn’t the only innovation-focused hub to receive public money. In November, the Communitech hub in Kitchener-Waterloo were recipients of a $15 million grant from the province of Ontario, to be balanced over three years.