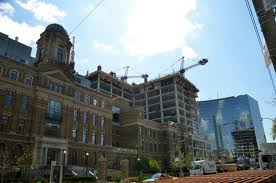 New reports claim that the MaRS Discovery District bailout fiasco could end up costing taxpayers almost half a billion dollars.

Mixed reactions hit the Canadian media landscape yesterday after news that Kathleen Wynne had effectively hid from the public a $317.5 million “bailout” of the MaRS Discovery District, a sprawling startup and “innovation” centre in downtown Toronto.

After the dust had settled, media outlets like the Toronto Star tried to make sense of the large startup hub for readers. Despite the 31 percent occupancy rate in a building that largely can’t afford to pay back a $234-million loan the government provided to MaRS in 2011, some entrepreneurs said it acted as a “jump-start” for their ventures.

Reaction on twitter saw several people issue supportive tweets for the entrepreneurs and employees of the registered charity, funded heavily by the province and aimed at fostering innovation and research.

I would highly recommend going to @MaRSDD, meeting the entrepreneurs working in their space, talking to people, etc, before condemning them.

Late last night though, new reports surfaced that the whole fiasco could end up costing tax payers $477 million, or about $160 million more than the initial estimates.

“A Star analysis of the documents — a confidential report to the cabinet secretary and a ministerial proposal to the Treasury Board — reveals that on top of the $317-million acquisition cost, taxpayers could foot the bill for an additional $106 million over the next three years to renovate and prepare office and lab space for building tenants,” wrote the Toronto newspaper.

“The tenants are expected to pay back those costs over time, but those tenants include government departments — who would occupy more than half of the building — and MaRS’s major tenants, Public Health Ontario and the Ontario Institute for Cancer Research.”

Tack on extra fees for “operating shortfalls” projected for the facility over the next two years and that spells another $54 million, to be taken on by the province. Apparently several other costs without concrete dollar amounts were also revealed.

MaRS was supposed to repay the government loan it received in 2011 through rental income from tenants. But by early 2014 “MaRS was unable to make payments on the loan ‘posing a fiscal risk to Ontario,’ according to the documents. The deal proposed to Treasury Board would see the Ministry of Infrastructure purchase the building and the land and, in effect, erase MaRS’ debt to Infrastructure Ontario,” wrote the Star.

The innovation hub is funded partly by the government and was created in 2002 through an initiative by then Progressive Conservative Premier Ernie Eves. It had a goal to bring together entrepreneurs and researchers to “monetize groundbreaking inventions in Ontario.”

NDP Leader Andrea Horwath said she would be “quite concerned if we yet have another example of the Liberals doing anything and everything to try to avoid any suggestion that the decisions they’ve made have been wrong decisions.”

Does diversity drive innovation? That was the big question at this past Thursday’s Queer Tech MTL event, which brought together a group of inspiring…