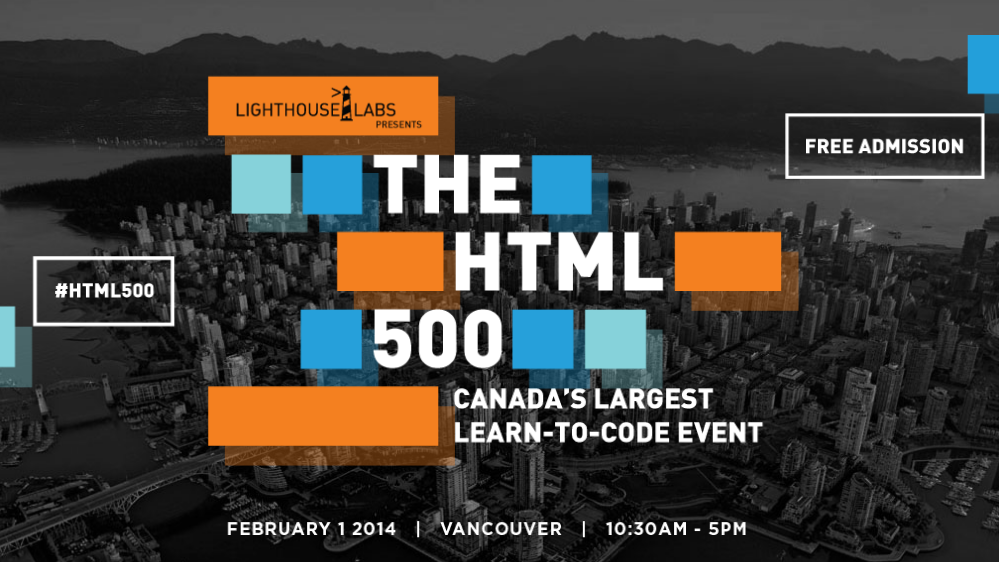 February sure seems like a future historic month for Canadian tech events.

The #HTML500 will likely be one of the biggest learn-to-code events in Canadian history when it will welcome 500 people next month in Vancouver.

Last week we reported on McHacks, another event set to push attendance boundaries. Student group HackMcGill claims it will be the largest hackathon in Canadian history with 500 projected hackers coming to McGill University February 23-24.

#HTML500, meanwhile, is being put on by Lighthouse Labs, a new Vancouver-based developer bootcamp similar to programs like Bitmaker Labs. Telus, Hootsuite, and the BC Innovation Council (BCIC) are also sponsoring the big event.

Lighthouse Labs claims that nearly 50 other tech companies and 500 new developers will make it the largest one-day open access education event in Vancouver on February 1. Participants will learn the basics required to build a website using HTML and CSS, raising awareness of the expanding Vancouver tech industry and the need for talent in local companies. Participants who previously had no knowledge of code will have built themselves a website by the end of the day.

“The HTML500 is the first step towards advanced tech education for the general public,” said Jeremy Shaki, event organizer and cofounder at Lighthouse Labs. “It is imperative that we show them, especially students, the advantages and ease of learning to code, regardless of the industry they are part of. As software development is instituted in standard curriculums in elementary and secondary schools, this generation of students will need to understand how to code to keep up with the new demands of the workforce.”

Lighthouse Labs claimed that the goals of #HTML500 are to raise awareness of the strength and size of the local technology community, bringing to light the career opportunities available in the sector. They referenced the well-known statistics that seems to undermine Canada in its pursuit of a truly innovation-driven economy: demand for talent far outstrips the supply, even with many global brands.

With a top 10 global startup ecosystem and geographical proximity to other major west coast hubs, Vancouver’s technology industry is poised for “explosive growth” they said.

“All in all, an awesome day of learning to code!”

Mover, an Edmonton-based startup that offers data migration services, was acquired by Microsoft today. Terms of the deal were not disclosed. The announcement was…