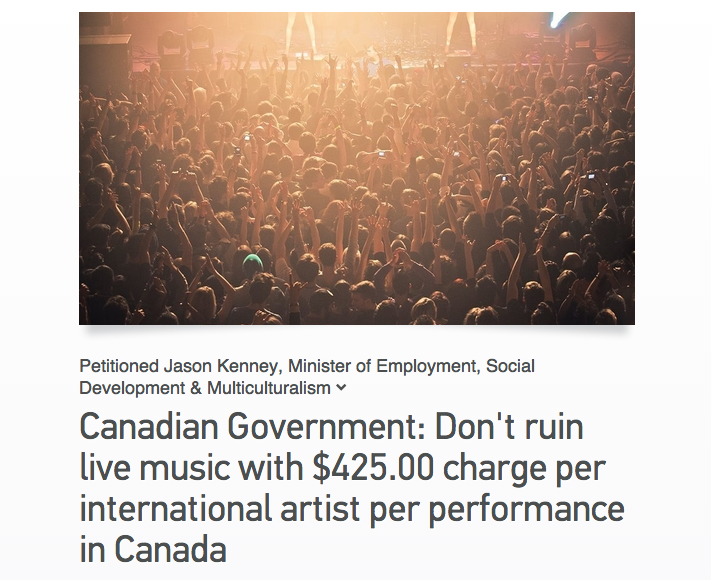 143,481 supporters signed a Change.org petition created by ConcertNinja, a web platform and community for individuals passionate about music, where users can actually influence their local music scene through the acts that perform.

As the Canadian Press reported, the removal of a work permit requirement for foreign musical acts was part of the government’s big overhaul of the controversial temporary foreign worker program. It went largely unnoticed among other more press-heavy issues, including workers in the fast food industry with places like Tim Hortons.

The law was originally enacted a year ago when the Conservatives added a $275 processing fee on top of a $150 work permit for each member of a musical act from outside the country who were hired to play small Canadian venues. It was immediately denounced by the independent music scene in Canada, which argued that the only thing it was preventing was quality acts coming into Canada, not illegal foreign workers taking away jobs intended for Canadians.

The government said at the time the fees were meant to help cover the costs of determining whether a Canadian should be hired instead of a temporary foreign worker in the music sector, in other words, rubbish. Even worse, larger venues were exempt from the new fee, leading to criticism that the measure unfairly penalized small businesses.

The petition, created by ConcertNinja founder Carlyle Doherty was entitled “Canadian Government: Don’t ruin live music with $425.00 charge per international artist per performance in Canada,” and featured both a petition and a tweet that people could send to immigration minister Jason Kenney.

Doherty wrote in the online petition that the former law would “inevitably cripple small music venues and small business talent buyers,” and that “the development of our culture on a global scale and the opportunity to invite talents from beyond our borders is something to be cherished and appreciated, not taxed in such a way that will only discourage Canadian talent buyers from welcoming international talent.”

Doherty, who formerly worked within the music industry for several years, was outraged.

Last week, however, the Canadian government changed their minds, and ConcertNinja says it was due to its petition.

The startup also announced that it launched first ever North American Tour Campaign entirely based on crowdsourced fan votes, for the indie electronic record label “Monstercat”.

Crowdfunding for Charities. Do you Giveffect?

Toronto startup Giveffect just launched a custom, white-label crowdfunding solution for charities, a much needed initiative in the space dominated by Kickstarter and Indiegogo….