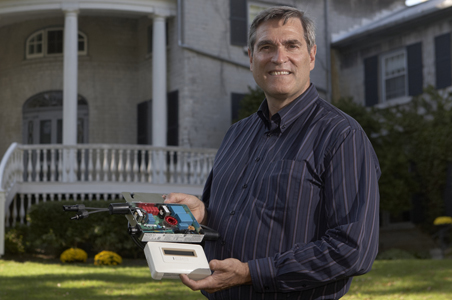 The round was led by the MaRS Cleantech Fund, with participation from the Investment Accelerator Fund (IAF) and the Ontario Centres of Excellence.

“2013 has been a transformational year for Sparq,” said CEO Randall MacEwen. “We have successfully commercialized our first generation microinverter with sales in Canada, the United States and Mexico. With our recent financing, we have strengthened our management team and are commercializing our next generation microinverter — a product we believe will reset the industry standard for cost, reliability, performance, ease of installation and advanced grid functions.”

Distributed generation (DG) refers to electricity that is produced at or near the point where it is used. Distributed solar energy can be located on rooftops or ground-mounted, and is typically connected to the local utility distribution grid, utilizing many small energy sources.

Sparq designs and manufactures microinverters, which convert power produced from solar panels into usable grid power for home solar systems. Sparq’s next generation microinverter is expected to be the lowest cost, most reliable and most advanced microinverter in the industry.

The team is led by Dr. Praveen Jain, a serial entrepreneur and professional engineer. The founder said he’s thrilled with the quality of the company’s new investor partners. “We appreciate their confidence in our business model, management team, technology and market opportunities.”

Meanwhile Murray McCaig of the MaRS Cleantech Fund said  it is excited to support Sparq as it scales the business. “Sparq has an innovative microinverter design that enables lower product cost and higher reliability.”  McCaig further noted that the market for module-level power electronics has expanded at a compound annual growth rate of 1,500 percent from 2009 to 2012.

According to Sparq, this technology is based on “novel power electronics topology with fewer conversion stages and high-frequency resonant switching, eliminating electrolytic capacitors”, allowing for a higher power density at a reduced cost.