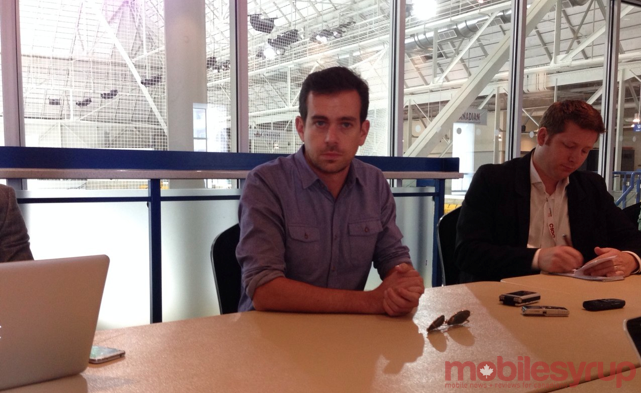 He completely changed the media industry and now he’s changing the mobile payments sector. But Jack Dorsey said that his new startup Square – which has now processed over $15 billion worth of transactions – is betting on more than just mobile payments.

It’s all in the balance for the 36-year-old, who sees user analytics as key to the mobile commerce enabler’s future. “You have some folks in companies around the world who operate purely on intuition and some who are purely data-driven, and I always find that life is in the balance,” Dorsey told a small gathering yesterday in Toronto. “We’ve struck that balance with square.”

Dorsey was in Toronto as part of the C100’s Accelerate TO event, giving a keynote speech to a packed crowd of about 750. But announcing his intentions for the future of Square was just one piece of interesting news Dorsey revealed.

In fact, the company has purchased a coworking space in Waterloo and will be hiring 30 engineers to work on a product initially geared to the US. The company is celebrating one year in Canada next month and total activations are up five times what they were at the beginning of the year.

Dorsey referred to the amount of University of Waterloo alumni now working at Square as “stunning,” and compared the small city to Silicon Valley. “I feel like what I saw of Waterloo…had that same sort of feeling: there’s an openness and there’s a desire,” said Dorsey.

Square’s services are directly targeted to small business owners who are looking for an affordable, yet cool, way to accept debit and credit card payments. For every credit card transaction Square takes a standard 2.75 percent, but the Square Register point-of-sale platform, card reader dongle and app (iPhone, iPad or Android) are all available for free.

Largely though, his message expressed the company’s desire to do more than just process payments, the “tiniest little aspect of what we do.” Instead, Dorsey is betting on the analytical power the service can bring mom-and-pop shops, independent coffee houses, and any other small or medium sized business. He recounted personal encounters he had with business owners in St. Louis, Detroit and Florida, where exposing the analytical evidence of how their businesses were performing helped them even in the short term.

“It’s around the data around their business, it’s knowing what their busiest day is, knowing what happens when they move the biscotti jar to the other side of the room. These are all things we’ve taken for granted on the web with page views and clicks,” said Dorsey. “Offline merchants, which still account for 94 percent of commerce around the world, don’t have any of this data unless the buy a $15,000 POS system, so we offer it for free.”

On Square Wallet, the upcoming tool expected to allow users to simply walk into a coffee shop and pay with their name and face, Dorsey said he’s working on it. Key to Square’s penetration of even the US has been wrangling with regulatory financial issues.

These issues have landed the company in hot water before, when Square was fined over $500,000 by the State of Florida for operating a payment service without a money transmission license. It was the company’s second run-in with a US state financial regulator since March of this year.

Nevertheless, the vision of intersecting one’s identity with their mobile phone was discussed by the founder. Dorsey said the phone acts as a “proxy” for one’s identity, comparing how just as one’s identity evolves over time, so too does mobile technology like Square’s. Our evolving identity acts as an amalgamation of our online persona, our offline personality, and everything else we transmit to others. Like our evolving selves, Dorsey feels that “there’s a lot that technology solves and payments will maybe be one part of it, and that’s how we see our business.”

When asked about his greater expectations for the company, like expansion, a conservative Dorsey said that the company just wants to focus on conquering Japan and Canada before moving on. “It took us nine months to get the product out in the US because of these relationships that we had to go through.”

He also said that eventually he sees Square taking any kind of payment: credit, cash, cheque, a phone credit, even bitcoins. “Whatever buyers are using, if they want to spend it, merchants should be able to accept it in the fastest, easiest way and get the data around how well its doing.”

Jack Dorsey changed media with the advent of Twitter. Now he’s changing mobile payments. So what’s next for the modern renaissance man? What new verticle will he take over?

“I think about it in terms of what do I want to use in the world and what do I want to use every single day, and I cant think of anything more foundational than communication and commerce,” he said. “They’re two very large foundations and if I spend the rest of my life enriching that and going deeper into those two I think I’ve done a god thing for myself and hopefully the world.”