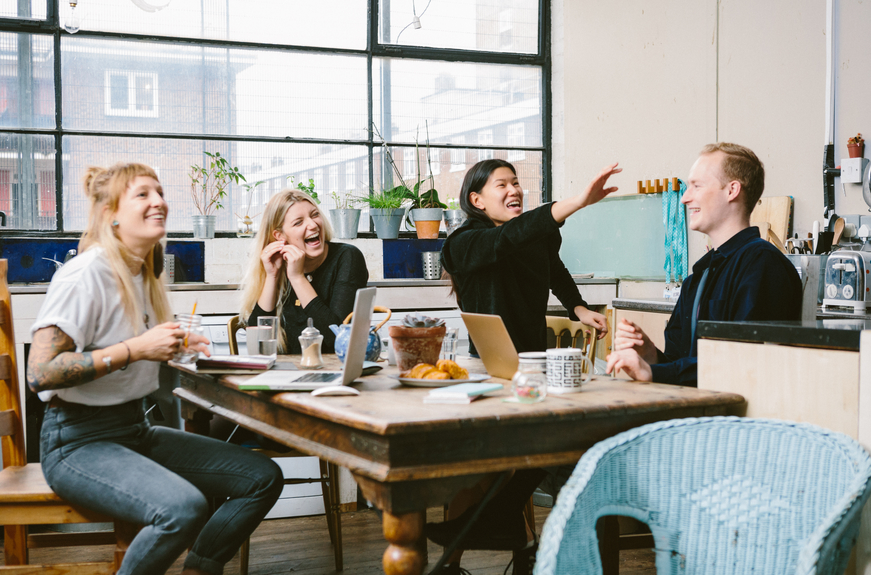 Talking to Yashar Nejati, co-founder and CEO of thisopenspace, a short-term rental marketplace for creative types, was truly a lesson in how to follow every good piece of startup advice you’ve ever received.

While some founders leverage their personal stories as a marketing device — but perhaps didn’t live through every challenge they purport to solve — Nejati and his team have walked the walk. The founding of thisopenspace came from stumbling upon a giant opportunity while building a smaller one, and having the wherewithal and gusto to chase the bigger dream.

It’s an inspiring lesson of working through hard times, finding your niche, “dog-fooding” your own services, and taking all those lessons back to create a supercharged culture that gives employees the chance to solve hard problems.

“I started a food company (‘Yummus’) back in 2013, and we wanted to do a popup café,” he explained. They thought nothing of the process of finding the space until they started getting attention from other entrepreneurs who wanted short-term rentals, and wondered how Nejati and his team found theirs.

Originally a part-time gig for Nejati while he continued to build Yummus (they exited to a competitor in 2015), he began collecting a network of spaces in his native Vancouver that were rented by startups and other creative types. It was not until Nejati was helping larger brands like Grolsch or Hershel get into retail spaces for popup shops did he realize there was “an opportunity to help hundreds of thousands of people.”

With any great startup story, though, comes the rough patches. Until January 2016, all of thisopenspace was run via a SquareSpace webpage and “Wizard-of-Oz” background manual work. He recalls evenings spent copy-pasting filled-out form information into emails, so that owners of a property would “automatically” get a notification when someone filled out a form to rent their space.

thisopenspace grew to a full-time business for Nejati when he brought his co-founder Adam Bent on in mid-2015. From that time on until August 2016, the few folks that came through the company ran on fumes; barely being paid market value (or anything, in Nejati and Bent’s cases), cycling through developers who all made their mark, and working out of Nejati’s kitchen table or in a small room they had rented (on thisopenspace) in Vancouver’s Chinatown.

Things got a bit easier for the team after they launched their platform in January 2016. The company started to generate more revenue, allowing Nejati to not only pay his team properly, but also hire a part-time graphic designer and a full-time UX designer. They then raised a seed round in August 2016 from prominent investors including Scott Lake, the first CEO of Shopify, allowing them to grow even faster.

What’s interesting about thisopenspace, though, is not about who invested in them or their growth trajectory, but Nejati and team’s laser-focus on only one thing: their customers.

I asked him about companies who could arguably be his competitors – I’m sure when I say “short term rentals for professionals” you can think of a few yourself – and his response was to say they are not in competition with other companies. Where most real estate startups focus on a use-case (office space, vacations, film shooting, etc.), thisopenspace focuses on allowing individual creativity to flourish.

This has led them to a niche that it says is not served by other real estate startups: non-professional space-renters. This means folks from a company who volunteered to plan their offsite, all the way to a photographer looking for a unique space for their next photoshoot.

By catering to a niche market of the ‘creative class, who work in corporations,’ thisopenspace says it sets itself apart from competitors.

This mentality also guided their expansion, breaking from the real estate startup norm of expanding based on market demographics. Instead of looking for new customers first, thisopenspace expanded as their current customers asked for it. Nejati noted, for instance, many companies that used thisopenspace in Vancouver were looking to do New York City activations, so thisopenspace expanded to NYC as their second major market in late 2015. The company currently has spaces in Toronto, New York, Los Angeles, Ottawa, and Vancouver.

The company was founded from Nejati “being his own first customer,” so many original features came from him solving his own problem – something he continually does, as thisopenspace owns the café Nejati rented for Yummus and rents it out to other entrepreneurs. Tie in his immigrant story of working to overcome hardships, and the fact that he initially built thisopenspace part-time and had to ruthlessly prioritize, and you have the recipe for thisopenspace’s culture, boiled down to one word: transparency.

“We all know the KPIs and we all know how much money is in the bank, so the motivation is real for our team,” he said.

Far from being a fear tactic to make the team work longer hours on Nejati’s pet projects, this transparency is backed up by everyone on the team’s ability to make suggestions and own the outcome. This empowerment process doesn’t mean everyone gets free reign, but it means each employee is able to, in the realm of their role(s), work in the best interest of the organization.

“One of our junior engineers came up with our instant-book feature, and he owned the process. Once we all started to see the KPIs rising, it became clear that the feature was working well and we kept it,” he said, noting that a sense of ownership over that result led to incredible engagement not only for the engineer himself, but also the whole team, who now wanted to be part of building the next amazing feature.

As well, openness is backed up by metrics that are customer-focused. “Our number one feedback measure is our Net Promoter Score (NPS),” he explained. “I personally read all the comments that come in and we want to push the number as high as possible.”

By taking a nuanced approach to transparency and work ownership, Nejati strives to build a culture that rings of his own personal experiences of facing intense hardships as an immigrant to Canada; de-centralized decision making, as he learned while building two companies simultaneously; and communicating frequently and honestly about the good and the bad, as he learned from previous business experience.

When we started our conversation, Nejati was telling me all about the two-day team offsite he was in the midst of planning. They do one quarterly, and it’s a time for the whole team to come together to re-align on corporate values, talk practical strategies, brainstorm initiatives, and connect as friends and colleagues.

You wouldn’t expect a scrappy, 12-person startup team to be so cerebral about their work, but Nejati swears by “family time,” as he calls the offsite, as the true secret to the success of thisopenspace.

The Northumberland CFDC, a business development corporation dedicated to providing financing, strategy, and a comprehensive ecosystem for entrepreneurs, is bringing back to N100 Startup Competition….