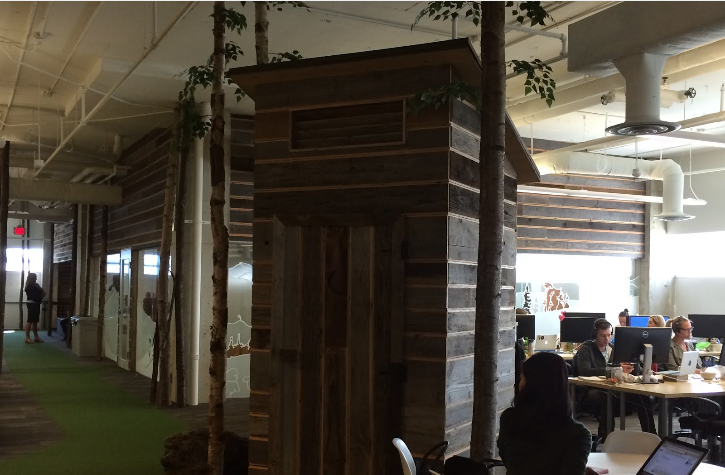 Not many companies can claim to have it’s ears attuned to the torrent of global conversations. As social media grows and functions as the conversational conduit, so grows Vancouver’s HootSuite. They recently open the doors of “HQ II” for a media tour, and quick Q&A session with CEO Ryan Holmes.

The HootSuite platform is being used by 744 Fortune 1000 companies. They now have a global headcount of over 600 employees, and growing. Holmes mentioned they’re currently onboarding 10 new people a week. It’s this growth, along with plans to add 100 more new staff by the end of this year that’s push them into this newest nest.

While the vibe is infectious and the view of Vancouver never gets old, it’s catching up with Holmes that makes touring HootSuite worth the effort. He’s never wavered on his commitment to build a billion dollar company that calls Vancouver home.

Beyond the trappings and the ski cabin motif, he’s quick to point out that, “nice offices are window dressing. It’s about building great businesses with fantastic fundamentals. I’ve always been passionate about contributing to the building of a dynamic tech community right here in Vancouver.

“The growth plans were made very clear as Holmes talked about the hiring of former groupon and Expedia executive Ajai Sehgal as chief technology officer. “It’s really thinking about our IT operations in terms of how we’re going to be able to scale from tens of millions customers to hundreds of millions over the next few years.”

He also commented on how much the Vancouver tech community has changed since he first started fundraising for the company about five and a half years ago. From a largely barren funding landscape and a much weaker ecosystem of startups, Holmes said “not being there culturally, I think it’s gotten better. I think startups need two key things, talent and access to capital to make it happen. You can’t live on ramen forever.”

The more capital available in the market the more smart people will be attracted to working with tech he noted. “Technology is our future. Mining and forestry are great, but people aren’t putting more gold back into the earth, and there’s only so much of our province that we can log.”

Providing entrepreneurs with more options and access to more capital was a big part of his message, saying “it kills me to see great ideas dying on the vine. We need to let young entrepreneurs take risks, go with their ideas and chase them down, and we need the crazy people who’ll back that.”

While he sees technology as our future, it’s also the first HQ where I’ve seen an outhouse having a place. It has a home at the CEO’s behest,  and I didn’t ask if it was an odd bit of symbolism. Instead, Holmes confirmed it’s paying a bit of tribute back to his days of living somewhat off the grid as a kid growing up in Vernon, BC. Besides it was also commonplace at any 1950’s era ski resorts and fits with the new HQ theme.