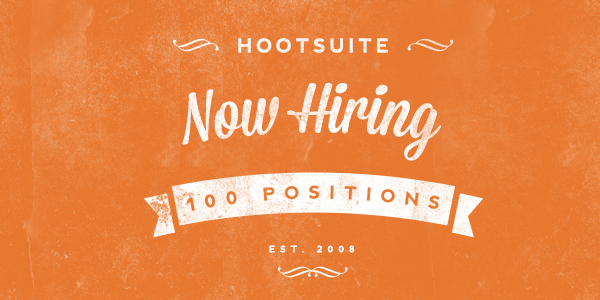 It was only a matter of time before Ryan Holmes and Hootsuite opened the wallet following their massive $165 million Seried B venture capital deal in early August.

The company recently announced its plans to fill “over 100 new positions across every department, including Development, Marketing, Sales, and just about everything in between.”

They’ll do it via a #hoothire jobfair-like event tomorrow from 5-7 pm. It’s going to be quite the bespectacled spectacle, I would imagine.

The company now employs 370 people, with almost 50 hires in Q3 along. This past March it held its first #HootHire event, which attracted over 600 hopefuls to the in-house job fair.

They’ve also brought our attention to this video that seeks to display the “unique company culture” while, quite humorously, spoofs the television show “Portlandia”. I’ll give Hootsuite the golf clap for that clever play (and who doesn’t like the intro music to that show?)

Students across Canada can now learn coding and computational skills, while also developing their knowledge of the Ojibwe language through a new version of…