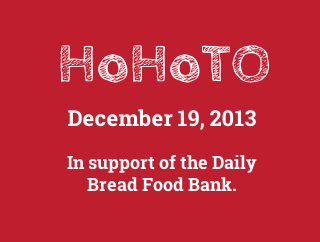 It was actually started in 2008, something the organizers say has become a “hyper-connected social media movement and a remarkable example of the power of self-organizing online groups.”

The story goes that five years ago a group of friends started talking on twitter about the plight of the homeless and hungry of Toronto. Today, five years later, HoHoTo has raised more than $285,000 and collected around four tons of food for hungry Torontonians.

“Using Twitter, Facebook, email, and our collected networks of close friends and loose ties, we kicked off a process that lit up the tweetstreams and blogvines; quickly turning a much, much bigger group of people on to the same core idea: That people in our great city are hungry and we can make a difference.”

The first year saw 600 techies show up ready to celebrate the year’s end while indulging in a few crisp beverages. It was organized in less than 20 days, sold out in nine, “and went on to astonish all of us involved as we watched something bigger than we’d ever dreamed take shape before our eyes,” HoHoTo wrote.

For anyone interested, you can snatch an early-bird ticket for $40 or $150 for a VIP ticket (including drinks and appetizers). 100 percent of the proceeds go to the Daily Bread Food Bank.