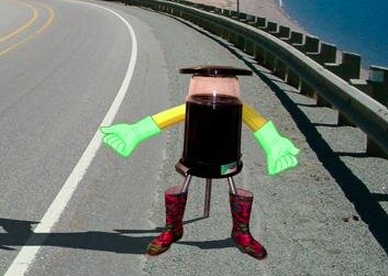 A Canadian-made robot will trek from Halifax to Victoria beginning on July 27.

<ahref=”http://www.hitchbot.me/”>hitchBOT, the hitchhiking, tweeting, trivia-loving robot will officially start its coast-to-coast journey at the Institute for Applied Creativity and the Anna Leonowens Gallery, both at the Nova Scotia College and Art and Design.

Dr. David Harris Smith of McMaster University and Dr. Frauke Zeller of Ryerson University first conceived of hitchBOT in 2013 as a collaborative art project. “Usually, we are concerned whether we can trust robots but this project take it the other way around and asks: can robots trust human beings?” said Dr. Zeller. “We expect hitchBOT to be charming and trustworthy enough in its conversation to secure rides through Canada.”

hitchBOT is an outgoing and charismatic robot that will be hitchhiking across Canada starting July 2014. Using artificial intelligence (AI) and user interface (UI) design, including speech recognition, speech processing, and social media and Wikipedia APIs, hitchBOT will charm its way through rides across Canada.

Meet my developer, Colin. He makes sure that the only bugs I see are splattered against a windshield!… http://t.co/e4xxPlPgh7

Other than its one hitchhiking arm, hitchBOT will not be able to move on its own. Smith thinks that hitchBOT will look “like somebody has cobbled together odds and ends to make the robot, such as pool noodles, a bucket, cake saver, garden gloves, Wellies, and so forth.”

Through its AI and User Interface design, including speech recognition and processing, and 3G and wifi connectivity, hitchBOT will know its exact location and can plan its journey form there. Its knowledge is derived from a Wikipedia API, which will assist in its conversations.

Ryerson University’s Legal Innovation Zone, in partnership with the Ministry of the Attorney General, has announced the ten startup finalists that will participate in…