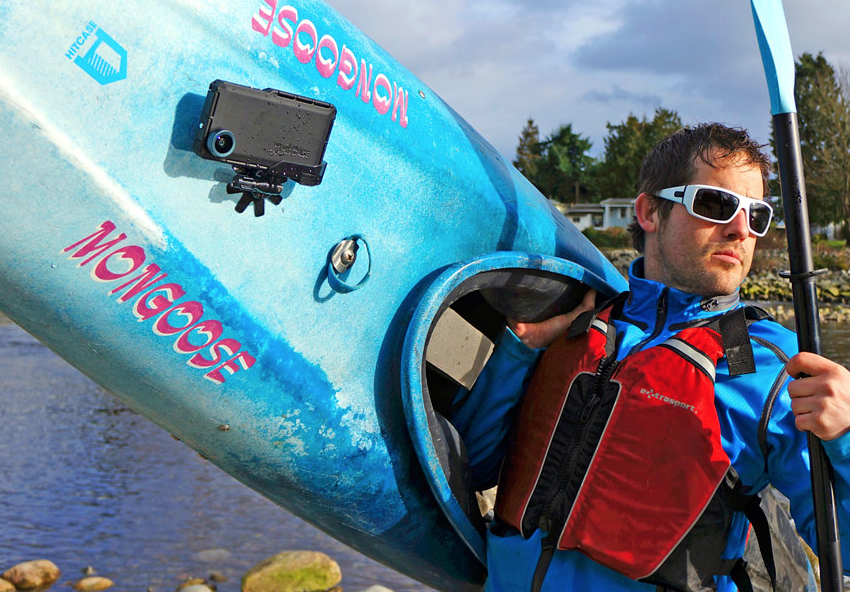 Fulfilling a personal desire to work with the most advanced and classified technology means Vancouver entrepreneur Brooks Bergreen has spent a number of years operating in very dangerous places.

He counts almost four years working with the Canadian and US military forces in Afghanistan installing satellite communication systems. Adding experiences in post-war Kosovo, and Chad, Brooks developed a significant understanding how to make things work in the wild, and the requirements needed for creating ruggedized enhancements for mobile computing systems.

Bergreen is also the founder of 3World Media and has produced of two documentary films, “Waging Peace” about Canada’s role in Afghanistan, and “A Perfect Soldier”, about a  former child soldier’s humanitarian demining efforts in Cambodia. All of this previous experience in film and working in hazardous environments lends well to him founding Hitcase, which is a waterproof, ruggedized case that transforms the iPhone into a POV camera for action sports.

There’s no mistake that Hitcase is serious business for Bergreen, except when compared to the seriousness of his past endeavours he’s now enjoying the fun, and adrenaline rush of scratching his extreme sport itch. Hitcase isn’t designed for a night on the town of snapping food and party pictures. Pick an extreme sport or activity, and you’re phone is wrapped with IronMan like protection. Bergreen notes for instance that “the seal technology is coming from the same people who meet the standards needed from NASA, US Navy nuclear submarines, and even Tesla.”

With a variety of mounting accessories be it for biking, boarding, surfing, or soaring no matter the weather conditions using an iPhone you’ll capture all of your extreme moments like a pro. This is pure function over fashion. With the phone becoming the primary camera for so many people, Bergreen see’s the “physical case being the perfect marriage with software.” This about about recording, editing, adding commentary and music, analyzing, cherishing and sharing the rush on the go.

Using the accelerometer, GPS, gyroscope, and compass sensors they’ve built Vidometer which is an application that delivers a custom and accurate graphical data telemetry overlay. Vidometer lets you overlay your speed, altitude, G-Force, and more on your videos so your friends know it really went down that way. It’s a heads-up display (HUD) for your phone.

Moving the business forward it’s now all about expanding distribution beyond their e-commerce efforts. As Bergreen shares “the process of winning shelf-space and the related costs of creating in-store point of promotion is massive for any business let alone a start-up.” In recent months the Hitcase team has secured sales commitments with the likes of Brookstone, REI, EMS, as well as retailers in both Australia and Norway.

There’s been no shortage of adventure for Bergreen. All things considered being entrepreneur fits his personality type well. He wouldn’t know a safety net if he fell into it. Besides these days testing his product by suiting up and eating dust on Whistler’s mountain bike trails beats donning the kevlar, racing around in Humvees and eating the dust of Afghanistan in a heartbeat.