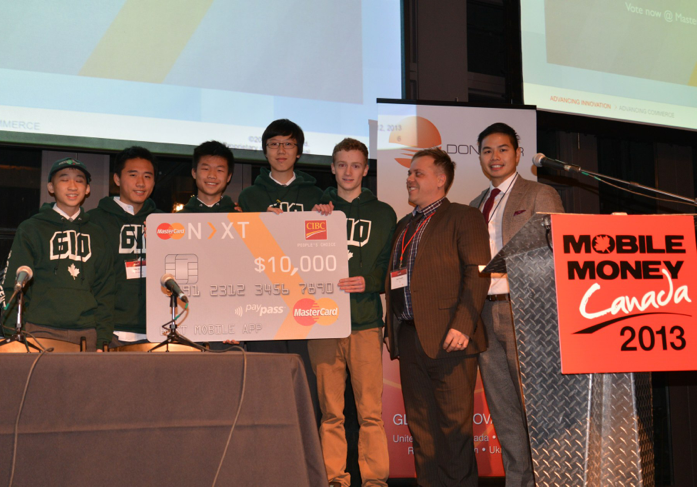 It’s not every day a pack of teenagers wins $10,000 for a fledging app conceived and built in 48 hours, but that’s exactly what happened to a group of Crescent School students. As winners of the MasterCard N>XT People’s Choice Award presented by CIBC, the high school team—better known to their competitors as The Coyotes—took home $10,000 for their innovative application idea and sophisticated result.

During the MasterCard N>XT Developer Challenge in September, The Coyotes built a smartphone application that splits restaurant bills among diners and accepts payment within the application. The app’s clean interface, market applicability and user experience caught the eye of the judges and landed the team of 16 year-olds in the top five of more than 20 teams. While The Coyotes just missed the student category grand prize, they were squarely in the running for the People’s Choice Award. Voting was held throughout October and The Coyotes were named winners at Mobile Money Canada on November 13th.

You can read more about the MasterCard N>XT Developer Challenge here and here.

The youngest in a field of 22 teams, The Coyotes brought to the Challenge a level of knowledge and sophistication that amazed the judges and Betty DeVita, President of MasterCard Canada. “To see how these five students had taken the complex payment infrastructure and distilled it to make it work for their application was incredible,” she said. “I was immediately impressed by the professionalism with which they approached the 48-hour challenge.”

The Coyotes are no strangers to the work of coding and that of developers, and one of the members explains how they learned to write Java code:

“We all took computer science last year, take it this year, and are all on the Robotics Team. Through Robotics, we work with exceptional mentors who are computer engineers,” says team leader, Grade 11 student Ian Lo. “I asked a group from Robotics to form a team when we learned about the Challenge from my father who is an IT architect. He encouraged us to participate, and test ourselves against other developers, and compete in MasterCard N>XT.”

Of their experience at the Challenge:

“Because we are involved in Robotics, and Robotics competitions such as FRC, we worked easily under pressure and strict timelines to produce the application,” says Grade 12 student Nick Haughton. “But in the end, it all came down to the pitch. I had only three minutes with a panel of executives from MasterCard, CIBC and Rogers. What I took away from this experience was that if a good idea is not presented well, it is almost useless; it was a great lesson in how the world of business works.”

And what will they do with their winnings?

“The real prize was the opportunity to network with industry leaders during the awards presentation at the Mobile Money Canada conference. Opportunities to make connections with the VP of Emerging Payments at MasterCard, the managing director of PayPal, and the VP of emerging business at Rogers Communications were available, and the topics presented by speakers that evening provided us with a great amount of insight into this fascinating industry,” says Nick. “We aren’t quite sure yet, but we will most likely invest our winnings back into the project. What we do know, is that we have been inspired to keep developing, and no one really knows when and where the next great idea will spring from.”