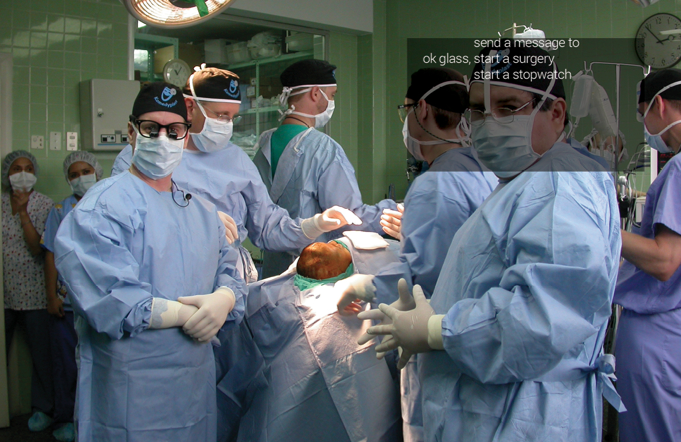 Earlier this week, Google launched its Glass at Work program in an effort to work with developers to create enterprise software for its first wearable tech. The program marks a key shift in Google’s marketing of its heads-up display which has mainly been consumer-driven up until this point.

Glass has consistently been under fire in the consumer market especially around issues on privacy and fashion. Bars are banning it. Explorers have been “attacked”. The device spurred the new slang word “Glasshole”. And despite getting Sarah Jessica Parker, Jennifer Lawrence and Diane von Furstenberg to wear it they still get called the “Segway of the Face”. Google has tried to pour water on this blaze by releasing a handful of guidelines explaining how to behave when using the heads-up display. And most recently debunked a list of myths mostly related to the fear caused by the device having a camera. But it’s an uphill battle.

A shift from consumer-use to an enterprise one may be the best road for Glass. This can help it thrive in an environment where fashion is a non-issue and privacy concerns can be mitigated by governance or perceived value. And as the general public starts to see well-respected professionals use Glass, like doctors, police officers and firefighters, this will help them better understand the value proposition of the device as well as start to normalize it making it easier to adopt it themselves. Glass is going to get a whole lot more respect once we start to hear about it saving some lives. (BTW it already has).

But enterprise didn’t need to wait for permission from Google to embrace this new technology. We have already seen many industries start to use this heads-up display because they saw how it could better business or help to improve the customer experience. The medical industry is one of them. According to a report by Global News back in January, surgeons at St. Michael’s Hospital in Toronto have already started to think about the use of Glass in the operating room to call up CT scans, x-rays and other patient related information while they are operating.

Montreal’s second edition of Hacking Health which wrapped up at the end of February saw the creation of two new Glass apps aimed at improving doctor and nurse performance. The team made up of developers, a resident surgeon, an engineer in neurosurgery and a graphic designer created V.A.S.E., a visual assisted surgical exchange. When a surgeon asks a nurse for a tool in the operating room, the nurse can ask V.A.S.E. to show the tool on the tray and even ask the app to show how to assemble it.

The second app the team created was specifically for neurosurgeons. It shows a live feed of images to the doctor via Google’s heads-up display in order to improve the usability of image-guidance in surgery which they would otherwise need to turn their body to view on a machine. Both apps are great examples of how the use of a heads-up display can assist medical professionals while continuing to allow them to use their hands, which is critical in this field.

Vancouver-based wearable tech research and development firm, Vandrico, is wholly focused on wearables in the workplace. The team is currently working with the mining industry to integrate heads-up displays, like Google Glass, to bring key information to the attention of those on-site like potential safety warnings, alarms from mining shovels and recent measurement results.

But medicine and mining is just the tip of the iceberg. Live events, solar roofing companies, and even airlines have started to play with Glass. This week, Orlando Magic will use Glass to give audience members a different in-game experience in the same way the Sacramento Kings and Indiana Pacers have done in recent past. And Virgin Atlantic made waves in using Google Glass and the Sony Smartwatch 2 to create the ultimate VIP experience for its airline guests. With Google now giving organizations and developers a hand in its new Glass at Work program we are sure to see even more examples of how Glass can change the face of business.

Startup Canada has announced all the regional winners of its annual awards at ceremonies that took place in Whitehorse, Vancouver, Edmonton, Mississauga, Montreal, and…