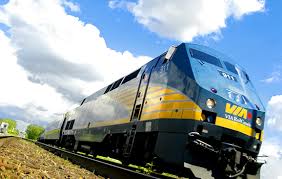 Once again Guelph’s ThreeFortyNine coworking space and its founder Brydon Gilliss will be taking startup entrepreneurs to Montreal on the Startup Train.

It’s an opportunity to spend five hours on a train from Toronto to Montreal, locked up with about 100 other “startup junkies”, investors, reps at larger companies and good company. And there’s a bar car, so a lot of people usually end of consuming a few beverages.

Having attended last year’s Startup Train, I can say it’s a pretty cool atmosphere and well worth the extra cost you’ll pay on top of your pass to this summer’s International Startup Festival in Montreal’s Old Port district. The train leaves Toronto the morning of July 9, in time for the evening of the festival’s first night.

While people are a bit shy in the morning before boarding the train, that all seems to diminish once all passengers have climbed aboard. Or maybe that happens after everyone’s first drink.

Since its such a small space, people are forced to meet other people, providing many a passenger with new friends to hang out with at the festival. We all go to conferences to “network”, but sometimes having 50 other new friends at a conference is a little more effective than showing up alone.

“Our main focus is just trying to get everybody connected who are on the trip together. Obviously we want to do something of value on the train and when we get everyone connected they feel more comfortable and they have lots of people to hang out with,” Gilliss told BetaKit.

One of the things they started doing last year, the Startup Train’s second year in existence, was trying to get people to express and share what they wanted to get out of the conference before hand, online via video message. “It not only gets individuals thinking about what they want to achieve and get out of startup festival but it gets them to share it and hopefully gets others interested.”

I asked Gilliss what his favourite memory has been over the first two train rides, and he told us about two BlackBerry reps who came on the train. They organized a pitch contest at the back of the bar car and the winning pitches received new BlackBerry phones.

An early investor and early board member of the company then referred to as Research In Motion, Jim Estill, decided to get in line and pitch his idea. He’s also an active angel investor and a primary investor in the Hyperdrive accelerator at Kitchener-Waterloo’s Communitech Hub. The thing is, the BlackBerry reps seemed to be oblivious to how important the person pitching them was to the existence of their employer.

“I found it fascinating that he got in line and pitched a mobile app to the BlackBerry guys and I have a feeling those guys had no idea who Jim was,” said Gilliss.

(To be fair I had no idea who he was either, other then a really nice guy and new friend to know at Startup Fest, which is part of the beauty of the train.)

Several startup-focused organizations will have representatives board the train again this year like Ryerson’s Digital Media Zone (DMZ). As well, some new faces will make the trek, like several young startups from a tech-focused program at the University of Guelph.

Those interested in taking train can purchase a ticket from the Startup Train website, which includes first-class travel to the festival, a ticket to the festival, as well as a discount code for a return trip with Via Rail. For startups the price goes for $599, however Gilliss is also working on courting a few sponsors who can provide the whole trip free of charge for a few lucky “starving startups”.