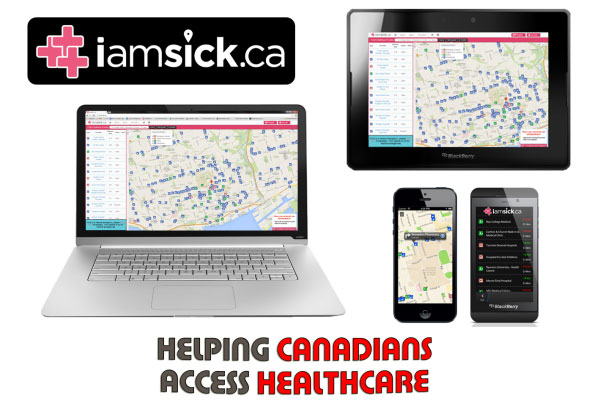 Iamsick.ca, the app that helps Canadians access healthcare, is extending its reach beyond Ontario with support from its crowdfunding campaign on Indiegogo. It’s raised just over $2,700 on its $9,000 goal.

Iamsick.ca is the work of Ryan Doherty, a PhD candidate in medical biophysics at University of Toronto. We actually quoted Doherty during the federal government’s CODE 2014 Hackathon in Toronto, back in February. There he joined up with a few fellow Canadian geeks and created an app that’s triggered whenever there’s an earthquake in Canada.

Back to iamsick, it first launched its crowdfunding campaign a few weeks ago to boost its Canadian presence, until now exclusively in Ontario.

Doherty and iamsick are primarily trying to help those who experience trouble in communication, to find the right clinic. Particularly in a multicultural nation like Canada, the app has some pretty obvious potential to land in people’s iPhones and Androids.

“More than 700,000 Canadians need an interpreter due to language barriers in healthcare,” said Doherty. “Our app quickly shows nearby pharmacists or physicians who speak one of 25 languages. We are expanding the list of languages and working with organizations that support refugees and new Canadians to help them benefit from our service.”

Launched in the fall of 2012, iamsick displays the nearest healthcare options – including hours and contact info for nearby clinics, pharmacies and hospitals through its app that simplifies the search for same-day health care.

The company’s goal is to expand quickly province by province until the entire country is serviced by the app. The modest Indiegogo goal of $9,000 “will trigger the first province expansion with additional provinces being added as the funding increases.” The larger goal is $90,000, which iamsick says “will lead to Canada-wide coverage by September 2014.”

The free iamsick app is available for BlackBerry 10, iPhone & Android.