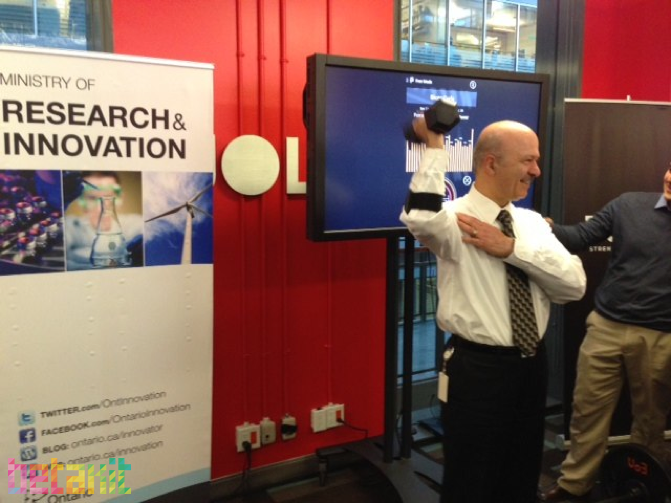 The Youth Investment Accelerator Fund (Youth IAF) was officially announced in 2013 with a goal to help entrepreneurs under the age of 30 get a head start and launch their business. The fund invests in technology-based startups and today the first four recipients were announced.

Honourable Reza Moridi, Minister of Research and Innovation, was at MaRS and declared, plus showed off his strength, that the first four recipients — PUSH, Soapbox, Rubikloud and Greengage Mobil — will each be receiving $250,000.

Some of the investments were actually made months ago, but officially highlighted once again today. Back in October it was Toronto’s Greengage Mobile, a web and mobile software platform that engages and drives adoption of health/wellness, and green initiatives, announced a $1 million funding round, which the IAF was proud to be part included. The second investment was directed to Toronto-based Big Data company Rubikloud with an investment round of $1 million last November, which included funding from MaRS Investment Accelerator Fund (IAF), Hong Kong-based Horizons Venture and a number of private angel investors.

The other two startups to receive funding are Soapbox and PUSH.  Soapbox, previously known as HitSend, provides an online tool for customers and employees to have their ideas heard, recently announced that “After having bootstrapped for 3 years we decided that it was time to accelerate our growth. We closed our seed round of financing in late 2013 with the participation of some great partners: MaRS IAF, Ontario Centres of Excellence, and Ryerson Futures.”

Toronto-based PUSH, who’s part of our JOLT cohort #2, is a new entrant in the fitness tracking wearable space and tracks and analyzes your performance at the gym. Unlike other fitness trackers on the market, which are more or less ‘digital pedometers’ that count steps and estimate calories, PUSH measures your power, force and balance. PUSH successfully raised $133,812 on its Indigogo campaign — the goal was $80k — and aims to release the product this coming summer. Building on this news is another $500,000 investment from the Investment Accelerator Fund.

Reza Moridi stated “Youth IAF start-up companies like PUSH, Soapbox, Rubikloud and Greengage Mobile are great examples of Ontario’s Youth Jobs Strategy at work. Our strategy aims to help 30,000 young people from across the province find work, build job skills or start their own business. This fund will help young entrepreneurs get their innovative products to market faster, while creating good jobs and building the economy of tomorrow.”