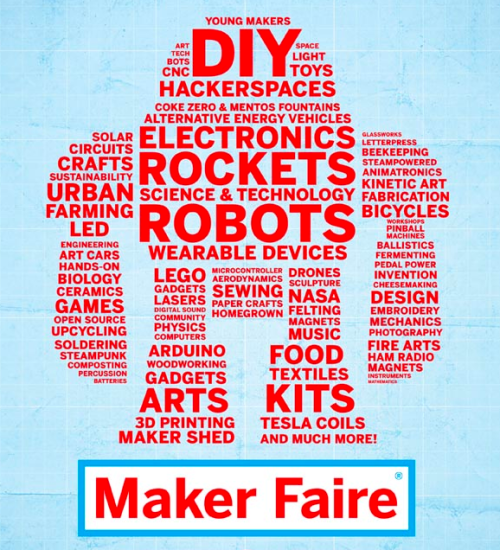 Later this month I’ll be eating 3D printed chocolate while controlling a working R2D2 robot against a background of LED lights and giant Rubik’s cubes. It sounds like a drug-induced Willy Wonka-meets-Battlestar Galactica dream state but actually it’s a weekend at the Mini Maker Faire, coming to Toronto September 21 & 22.

Maker Faire Toronto is a celebration of Makers – a term fondly being used by 3D printers, DIY-robot makers, hackers, tinker-ers and hobbyists.

We are in the midst of a maker movement caused by the democratization of manufacturing and the widespread availability of online marketplaces which let Makers sell their goods – Shapeways, Etsy and eBay come to mind. The Maker movement has exploded thanks to cheaper and more accessible 3D printers, motors, sensors, accelerometers and the like. The movements rapid growth is also due to open-sourced platforms like Arduino and knowledge sharing sites like Github and Instructables.

Maker Faire is part sci-fi, part County fair. The event is forward-looking and showcases makers who are exploring new forms and new technologies. The original Maker Faire first took place in 2006 in the San Francisco Bay area with 800 makers and 110,000 people in attendance. Since then , Maker Faires have been held all around the world including New York, Tokyo, Newcastle (UK) and Rome. This is the second year that the Faire will be held in Toronto.

According to the Toronto Maker Faire organizers, “exhibits on display will probably include robots, laser cutting, letterpress printing, 3D printing, kinetic sculptures, space tech (fingers crossed) and stuff SO NEW AND AWESOME it has no name yet.”

Here are some of the exhibitors we are most excited about checking out at this year’s Toronto Mini Maker Faire. See you there!

Founded by a small group of Mechatronics Engineering graduates based out of Waterloo, Ontario, the team has created the world’s first Chocolate Selective Laser Sintering 3-D printer that can form solid objects by selectively melting chocolate powder.

This is a group of enthusiasts that have designed and built their own fully remote R2-D2s from the movie Star Wars. The group formed on the internet in 1999 to share ideas on how to build their favourite droid. This group now numbers over 5000 members worldwide.

Toronto-based startup, Matterform, raised over $470,000 on Indiegogo to bring the world’s first truly affordable 3D scanner for home use. The Matterform 3D Scanner allows anyone to take a physical object and turn it into a digital 3D model on their computer.

The Society of Awesome is group of scientist-artist-technologists. Formed in January 2012, the group consists primarily of university students and staff keen to share and expand their skill sets by engaging in artistic technical projects. Magic Cubes are giant interactive Rubik’s Cube-like creations built out of colour changing LEDs.

The Nudgeables Accessory Kit is a modular hardware kit for creating paired sets of wireless wearable accessories from the Social Body Lab at OCAD in Toronto. By creatively embedding wireless communication into yours and your friend/partner/colleague’s garments, you are able to secretly “”nudge”” each other at a distance. We are especially eager to see this set of socks which allow two people to simultaneously dance and Nudge one another by closing soft switches across each pair of socks.

A trio of University of Calgary engineering grads decided to sell ugly christmas sweaters online last year and it worked out well for them….