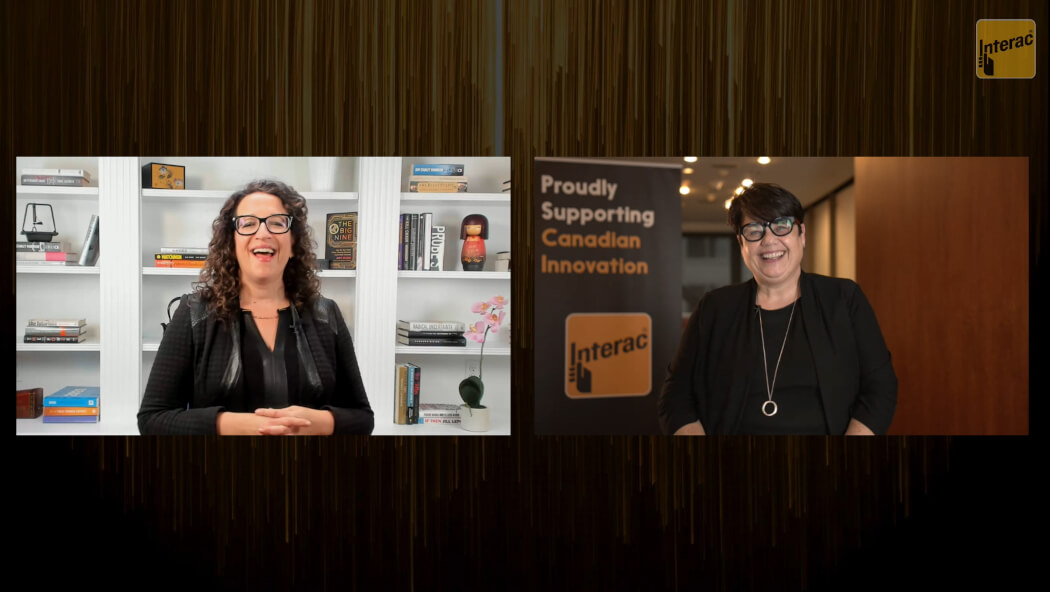 The COVID-19 pandemic has businesses driving on ice and too willing to slam on the breaks says, Amy Webb. This Thursday, the noted author and CEO of the Future Today Institute spoke with Debbie Gamble, chief officer of innovation labs and new ventures at Interac, in a fireside chat jointly hosted with Elevate about data, trust, and how businesses can respond to the current pace of technology innovation induced by the pandemic.

“The companies that get through this, that don’t just survive, but wind up thriving, have their eye on the farther future.”

According to Webb, the technological disruption caused by COVID-19 has presented businesses with a new set of challenges and opportunities, particularly with regard to how they approach data. For example, with a new surge in demand for virtual health solutions, new questions have arisen about how health data is collected and managed to ensure privacy is protected.

Webb recounted a conversation in which a prominent CEO expressed excitement for a solution that could immediately test employees for illness each day before starting work, rather than considering issues regarding privacy protection and data ownership risks that could arise with such a technology.

“Data itself is not a panacea,” Webb said. “The problem is that as our systems become more complex, we tend to pull back. And the problem with this is that these very same systems that mine, refine, optimize our data, are also making decisions about us.”

Webb said just as consumers need to be aware of how their data interacts with the technology they use, businesses must also not push data governance to the bottom of the priority list, and should begin asking questions that go beyond the surface-level value proposition of collecting and storing data.

"The challenge is when we bury our heads in the sand and say to ourselves…'we have so much going on. #Data hygiene? We'll deal with that later.' At some point, we're going to have a reckoning."
– @amywebb

"The reckoning may be already upon us"
– @debgamble1 of @INTERAC

“Yes, you can leverage data to expand your business. But you also really need to think hard about trust, and about data hygiene and risk and making sure that the data that you are collecting are being put to good use,” Webb said. “They’re big questions that we’re going to have to ask going forward, even today.”

Some key questions on data businesses should consider more deeply, Webb said, include: who owns the data, who scraped the data, and is there algorithmic accountability? She added that risk modelling and data scrubbing are things that tech companies are actually disincentivized from doing for financial reasons, but prioritizing data is critical in the current era.

Businesses that want to thrive can’t “slam the breaks”

Webb noted that the COVID-19 pandemic was only a catalyst for the changes being seen, with trends such as wearables that collect biometric data and collect health information already in motion.

“These were already things that we were tracking, and because of COVID, now we’re seeing a big, quick shift,” she said.

Webb also observed that in times where change is happening at an accelerated rate, many companies become myopic. Their first reaction is often to “slam on the brakes” instead of slowing down, keeping an eye on the future, and planning incrementally.

"@Amazon and @Apple and @Google are selling products for less than they cost, and they're getting into payments, which suggests that the #data is more valuable than the transaction. That means #trust and #identity are paramount."

– @amywebb on the future we're moving towards

“The companies that get through this, that don’t just survive, but wind up thriving, have their eye on the farther future,” Webb said. “And that farther future, where they’re trying to go, means that they are slowing things down.”

Webb likened the business community’s response to COVID-19 to cars driving on ice. She said although the first reaction is to slam on the brakes, the decision with the best likelihood of success involves slowing down and recalibrating.

For companies, she said, this means not making a few decisions once a quarter, and not conducting future planning just once a year. Rather, looking to the future should be an always-on process, with incremental decisions.

“These characteristics were always important, but they have never been more important than they are right now,” Webb said. “If you know that, the reality is that oftentimes catastrophe can be a great catalyst for change.”

BetaKit is an Elevate media partner.

With online publishers not only looking for new ways to monetize, but ways to increase the time readers spend on their sites and the…