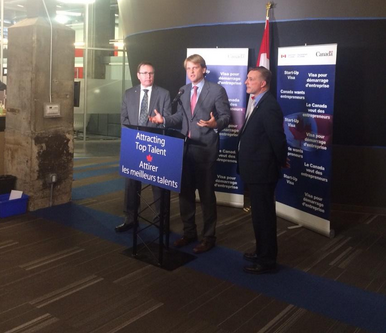 It hasn’t exactly been the speediest implementation of a government program over the last year in regards to the Startup Visa, the program meant to attract foreign, high-value entrepreneurs to Canada, providing them with a fast-tracked Visa. Today’s visit by Canada’s Citizenship and Immigration Minister to Communitech may have shed a bit more light on that issue though.

We’ve only heard of one startup that received the Visa in July, when Zeetl cofounders Stanislav Korsei and Alexander Zadorozhniy were the first recipients of the program. That was a full 16 months after the program was first introduced on April 1, 2013. Even by late September of last year, concerns about the program were already in the air when Citizenship and Immigration Minister Chris Alexander visited GrowLab.

Today’s “round-table” event then may have simply served as a reminder that the program still exists and that it is actually on its way to reaching its milestones.

According to a release, today’s visit by the minister was meant “to build on the momentum of Alexander’s visit to GrowLab Ventures in Vancouver last month, where he welcomed the first two successful applicants under Canada’s Start-up Visa Program.” Moreover, “Alexander discussed the importance of the program with a number of local business leaders and encouraged organizations to continue their efforts in identifying exciting start-up opportunities, as well as the dynamic entrepreneurs behind them, with the help of the Start-up Visa.”

“Our government is focused on long-term prosperity and economic growth for all Canadians,” said Alexander. “We will continue to work with business leaders who can support creative business ideas and help Canada compete on a global scale.”

Also announced during the roundtable was that in January the CIC will launch a new electronic application management system called Express Entry, which will offer a faster and more effective way to welcome economic immigrants to Canada than ever before. Clearly, from the curious voices of so many Canadian and foreign entrepreneurs over the past 17 months, something is needed.

The Startup Visa will not only be beneficial to those foreign entrepreneurs who get to apply for it, but it will also clearly benefit those Canadian businesses around them, as well as the ecosystem as a whole. Lets just hope the second half of year two is much faster than the first.

It’s no secret that Canadian companies have a scaling problem, and everyone’s got their take on the reasons why. Whether it’s the a gap…