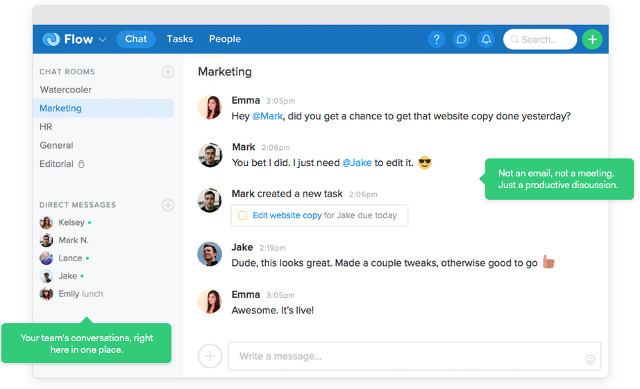 Earlier today, Victoria, BC-based Flow, a task management product used by companies like Tesla, Etsy and TED, launched a new chat feature within their task management platform. In just a few hours, Flow has already been upvoted as the top product on Product Hunt.

As Flow is focused on streamlining workflow, the addition of a communication feature makes sense. Andrew Wilkinson, CEO of Flow, told BetaKit that working together is dependent on clear and organized communication, and that current available tools for communication don’t capture how teams work best.

“We’ve found that tools like e-mail don’t work at all for us. They’re just too slow, and the nature of e-mail leads to important information getting lost,” said Wilkinson. “Messaging apps have led a good charge against email and meetings, but ultimately, all that important communication with your team doesn’t have anywhere to go. Where do your decisions go when things actually need to get done?”

Wilkinson is notable for being the force behind MetaLab, the design company that helped build Slack. The new additions to Flow may put the app in direct competition with Wilkinson’s old client, although there are some significant product differences. With Flow, users can create open chats for their team, capture any next steps as tasks and follow them through to completion. Wilkinson says the goal is to create an end-to-end workflow for teams, and ensure that any agreed-upon tasks during discussions aren’t lost.