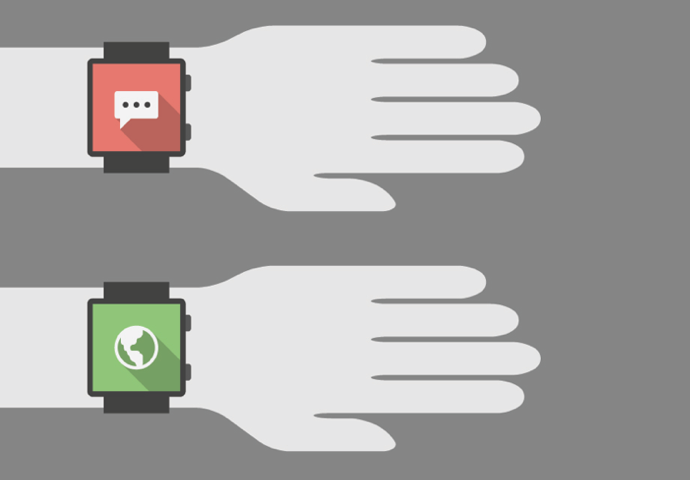 Smartwatches are one of those controversial new devices which everyone seems to love to hate right now. The overwhelming wave of radical opinions is a clear sign that we are on the brink of the next wave of computing. Wearable technology in general has the potential of being a game changer with the smartwatch leading the charge.

I am bullish on the success of smartwatches. I have been an early adopter of these wearables since Kickstarter-darling Pebble starting shipping earlier this year. And I recently made room on my wrist for Samsung’s Galaxy Gear, which I have to say is a pretty nice piece of arm candy (geek talking here).

But I am not alone. Analysts are predicting that smartwatch sales over the next couple of years are set to explode. NextMarket Insights estimates that annual smartwatch sales will grow from 15 million units in 2014 to 373 million devices by 2020.

It’s true that it’s very early days for smartwatches. You could akin where we are at today to the late 90s when we were using PDAs pre-iPhone. This means that there is a lot of room for improvement (ahem, better battery life, more stable Bluetooth connectivity, need I go on?). It also means that there is still a huge opportunity for one (or many?) major player to jump in and really nail it.

But one thing is for sure. The timing is right for us to start walking around like Dick Tracy or Penny from Inspector Gadget. Here are five reasons why smartwatches are here to stay.

Reason #1: The “Big iPhone” Pattern or Why Being Similar To Smartphones Is Key To Smartwatch Success

Remember when the iPad came out back in 2010. There were tons of skeptics back then who were skittish on this new form factor. Many were doubtful that people would spend money on just a “bigger iPhone”. YouTube was flooded with parodies of people walking around talking on their larger than life smartphones.

Fast forward to today where the iPad now makes up 20 percent of Apple’s revenue with 14.6 million iPads sold last quarter alone. Gartner expects that worldwide tablet shipments will increase by 53.4 percent in 2013 and will reach over 263 million in 2014. We are just three years since the launch of the iPad and no one would dare to argue that the tablet isn’t here to stay.

One of the reasons tablets have been adopted so quickly is because of how akin they are to smartphones. The fact that the iPad was just a bigger iPhone sold us on our need for such a device. We were used to the touchscreen interface. And we saw value in using the same applications as a smartphone on a larger screen.

I see this same pattern developing with the smartwatch, but on the opposite end of the spectrum. In many ways, the smartwatch is just a smaller screen. And like the “bigger iPhone” I think we are ready for it.

Like the iPad, Samsung Galaxy Gear’s touchscreen is familiar to users right of the box. Swiping and tapping through menus and functions is expected from this wrist-sized screen, as it is with any sapphire glass surface we encounter today. The fact that you can pick up a Galaxy Gear and instantly know how to use it bodes well for the adoption of this wearable device.

As smartwatches are companion devices, they grant hands-free access to all of the core applications you can’t live without on your smartphone – calling, emailing, texting, picture taking and more. Like the tablet, the smartwatch doesn’t need to do more than give us another way to interact with the features we use on our smartphone to be successful.

Reason #2: FOMO (Fear of Missing Out) or Why Feeding Into Our Notification Addiction Is All A Smartwatch Needs To Do

We are a culture suffering from an addiction to being connected at all times.

Most of us can’t live without our smartphones. According to a recent Google Study, 35 percent of Canadians would give up TV before parting with their smartphones. In the US, one in 10 people have used their smartphone during sex. And according to Psychology Today, 40 percent of the population suffers from a new anxiety-filled condition called nomophobia as in no-mo(bile)-phone-phobia.

We check our smartphones constantly to see what’s happening.  And we have especially become beholden to the notification chime which lets us know that something new needs our attention. Our smartphone addiction is one of the major reasons why I believe smartwatches, and other wearable tech like smart glasses, are the logical next step in our technological evolution.

Smartwatches right now are primarily notification-driven devices. They let you know when someone is calling, you’ve received an email or have an upcoming appointment. But they do this all without having to take your phone out of your pocket.

It’s pretty life changing when you can see who is calling you or quickly check a text message when you have both hands tied up with grocery bags walking down the street. Or to be able to quickly jut your eyes down at your wrist to see if the email you just received is worth disrupting the meeting or dinner you are at.

After just a few weeks of owning a smartwatch, I can easily say that I started to check my watch before my phone for notifications. It just felt much more natural. And it was certainly easier (well, when the connectivity wasn’t screwing it up). I have become so reliant on my smartwatch that I find myself panicking if I accidentally forget to put it on in the morning before I leave the house.

Smartwatches definitely don’t fix our notification addiction. If anything they nurture it. But what they do provide is a much smoother, easier and possibly more human way to satisfy the itch. And it’ll be for this reason alone that many will get one.

Reason #3: You Can’t Handle the Future or Why Looking Like a Watch Is A Necessary First Step

Smartwatches are getting a lot of flack for not being futuristic looking enough. One of the biggest criticisms is that smartwatches, like Pebble and Galaxy Gear, look too much like a watch. It seems that everyone is pining for Apple to come out with one that looks like many of the futuristic concepts floating around on the interwebs. You’ve seen them. Curved glass cuffs that look like they are straight out of a Sci-Fi TV show.

But take it from someone who has been walking around with a piece of future on his head for the last four months. No one is ready for the future. As a Google Glass Explorer, I have witnessed firsthand the negative reaction most people have on the aesthetic of Google’s Glass device. I can literally count on one hand the number of people who said that they would feel comfortable wearing Glass out in public. But once I ask if they would wear Glass if it looked like a pair of prescription glasses this number goes through the roof. This is why the rumoured partnerships with Ray-Ban and Warby Parker are so important to Google Glass.

Like Glass, smartwatches need to look like something we are familiar with. And so looking like a watch is entirely necessary right now, at least right out of the gate. Once we get familiar with the form factor, I am sure that we will be ready for the cuff in no time.

I do agree with most of the pundits, however. Those getting in the smartwatch game need to have a much keener eye for design. Like Glass, a partnership with major fashion houses like Michael Kors, Movado or Tag Heuer could really take things to the next level. But when these do occur, I’d still expect these smartwatches to resemble a watch because we more quickly accept what we know.

Reason #4: Selfies While Eating Noodles in Chinatown With My Cat or Why Slapping a Camera On Our Wrist Is A Key Selling Feature

I bet you never thought you would be taking so many pictures than you have with your smartphone. You also probably never thought that you would be spending endless hours following people on Instagram looking at pictures they took of themselves, their food or their cats. Instagram has over 130 million users and has seen 16 billion photos shared since its launch in 2010. It’s safe to say that we are extremely picture-happy.

I was very skeptical of the Galaxy Gear “spy cam” at first. But it’s actually come in handy when you want to capture something in the moment and don’t have time to fumble with your phone. In this way, Gear shares the same killer feature which Google Glass has been known for – the ability to take quick, hands-free photos. This may not be the most innovative of features, but it is one that you will find yourself using a lot.

Reason #5: There’s An App For That or Why Leveraging The App Store Model Will Be A Deal Breaker For This Device

Like all successful hardware, the app’s the thing. Your smartphone isn’t really smart without the software on it. The same goes for your tablet. These devices owe their success to the developers who have created apps that make your device do anything from tell you the weather to allow you play games and watch movies. The fact that the smartwatch employs the same model is extremely key to its success.

We are already seeing some promise. Pebble is loaded with classic arcade games which are pretty awesome time wasters. And Galaxy Gear has some heavy hitters already on board for their device including personalized news app, Zite and social networking app, Path.

If the million apps in iTunes and Google Play are any indication of what is possible for smartwatches, it only means this device is going to get better and better.

The Laval Smart Mobility Incubator and Accelerator (CIAMIL), a non-profit organization based out of Laval, QC, has received a $100,000 investment from the federal…