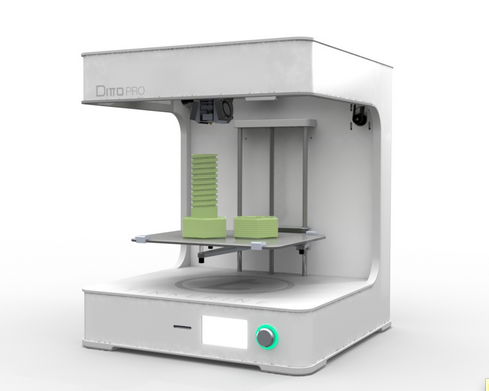 “The prosumer market is demanding a 3D printer that features quiet operation along with high speed, high resolution and massive build volume. DittoPro delivers on all of these, packaged in an elegant design that owners will be proud to have on display,” said CEO Eugene Suyu. “With its simple, one-click operation and ease-of-use software, DittoPro can be used for creating everything from engineering prototypes to educational models.”

Tinkerine said in a release that it “pioneered the 3D printing industry’s open C frame design,” which the DittoPro uses to allow the size of printed objects to be significantly taller and deeper than the leading competitor. Compared to other leading 3D printers on the market, the frame shape uses 43 percent less desktop space. DittoPro’s “quality machined aluminum construction and stable glass print bed allows precision printing” of very small parts as well.

Tinkerine’s wanted to develop an easy to use, elegant, and reliable 3D printer aimed at the prosumer and education markets. The company’s engineers spent more than a year in development and testing of the Ditto printer series before releasing it to the market.

“DittoPro is a superbly-crafted 3D printer that meets all the requirements of the prosumer user and education markets,” said VP Todd Blatt. “Its elegance blends nicely into a classroom or on a desk, and its reliability and higher performance set it apart from the other leading machines in the market. It allows me to spend my time tinkering with my project, and not with the machine.”

The DittoPro 3D printer can be purchased at the Tinkerine Studios online store.

Often overlooked, Québec City’s tech is “punching above its weight”