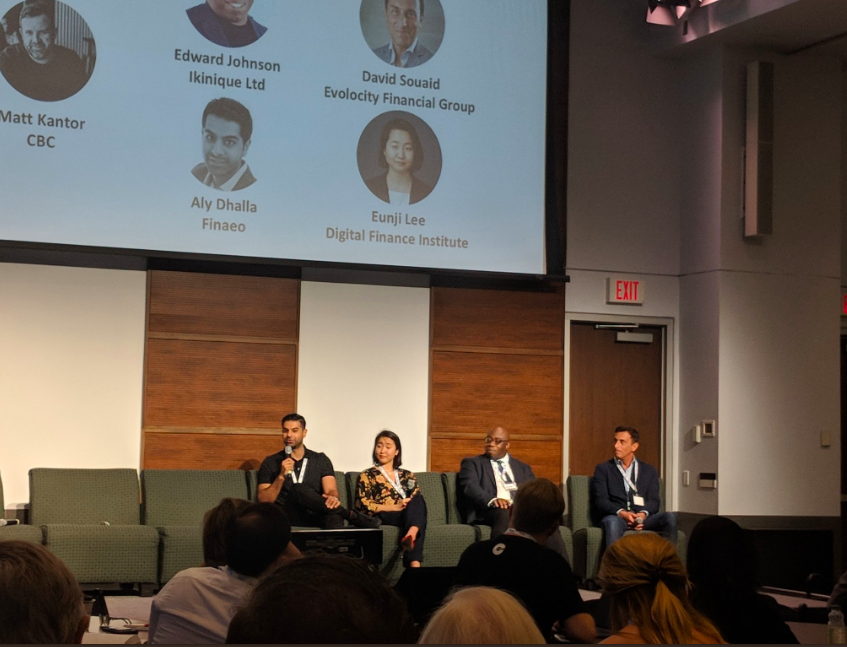 Last week, the Digital Finance Institute hosted the FinTech Canada conference, which put a lens on the technologies set to change the way both FinTechs and banks do business.

Inevitably, a major focus of the event was blockchain and cryptocurrency, which is being met with interest from consumers and apprehension from regulators, especially in Canada. On a panel, CoinSmart co-founder and CEO Justin Hartzman said that regulation is “coming down the line,” and that crypto will naturally become a part of people’s portfolio as it becomes more accessible.

“If we look at the S-curve of adoption, we’re still in the long tail of that,” Hartzman said. “We’ll see ups and downs before we get to the inception point, and when we do, I think a lot of will change. Banks will be on board and regulators will be on board…we’ll all be regulated and blockchain will be huge.”

"If our regulators aren't going to sign off on a unified KYC form and mandate individual bank due diligence, then the system breaks down. We need regulatory support."–Lester Joseph of @WellsFargo at #FintechCA

How cryptocurrency is used isn’t just a concern for regulators—law enforcement is also watching the space closely. While cryptocurrency has a reputation for being used by drug dealers and terrorists among the general public, lawyer Brian Klein spends his time defending entrepreneurs and technologists at the centre of crimes related to technology. In the past, Klein has represented people like Theresa Tetley, who exchanged millions of dollars in cash for bitcoin on behalf of clients, including for a suspected drug dealer (Klein got her sentence reduced from 30 months to a year). He’s also currently representing Marcus Hutchins, who has been regarded by some as a hero for helping slow the spread of WannaCry software last year, and is now being charged for allegedly writing code for banking malware.

AI and machine learning can be helpful in catching criminals, as AI’s ability to perform advanced pattern recognition can spot if certain transactions seem suspicious.

He noted that bitcoin and cryptocurrency is the worst way to launder money, as there is a permanent record of the transaction, unlike cash, and predicted that as cryptocurrencies become more mainstream, there will be less focus on the fact that cryptocurrency is involved in the crime, but instead on the crime itself. For example, you would say that someone robbed a bank, not that they robbed a bank in US dollars. But in the meantime, Hutchins said there is a still a long period of education for law enforcement.

“I spend a lot of time meeting with law enforcement, talking to them, and trying to educate them. They do misunderstand technologies,” he said. Hutchins added that decentralization is one of the major concerns from law enforcement, as it isn’t clear who would be in charge of records in a decentralized exchange or platform.

I had such a great time speaking at #FintechCA today about #Blockchain and financial crime! #FinTechCanada pic.twitter.com/XdoTPvMMK7

Ellis Odynn, chief AI Officer at the Digital Finance Institute, detailed some of the ways that illegal activity could be inhibited on crypto platforms, whose most common crimes include bank fraud, credit card fraud, and money laundering.

Odynn said her company is working on something called a ‘blocklist’, a list of wallet holders available publicly on the blockchain that could potentially be engaged in illegal or fraudulent activity. AI and machine learning can also be helpful in catching criminals, as AI’s ability to perform advanced pattern recognition can spot if certain transactions seem suspicious.

While bitcoin itself is anonymous, Odynn detailed the ways that people committing crimes could still be tracked and caught using cryptocurrency. She gives the example of three criminals committing a crime: one person bought $10,000 worth of digital currency with cash in a store, and the next two bought $20,000 and $30,000 in cash respectively within a couple of days. While it may look unrelated, through backtracing, you could see a few interactions deep that the three people who seemed unrelated put all their money into one joint account. She noted you can go even deeper, and find out that one of them might have a fake ID, or committed bank fraud, or used a stolen credit card.

“While your bitcoin might be anonymous, if you’re going through an exchange they’re going to need to get your identity. They have their own security policies, they’re going to be very AML compliant,” she said. “When it comes time to cash out, one of these guys is going to figure out who you are.”

The government of Canada has invested $1.7 million in the Centre d’entreprises et d’innovation de Montreal. Industry Minister James Moore made the announcement today in…