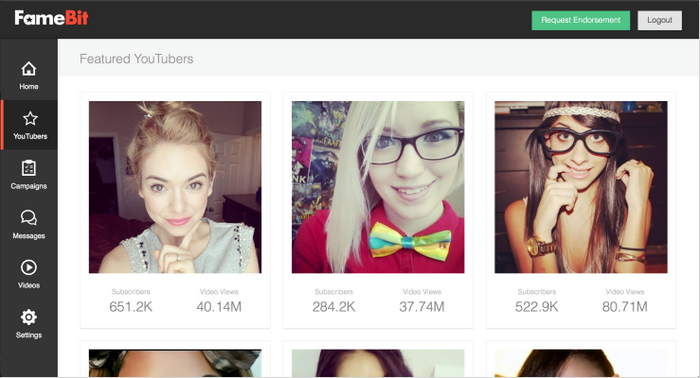 There’s a 24-year-old Swedish guy who makes videos on Youtube, where he comments on horror and action video games. To date he’s earned more than $7 million from the over 3.7 billion users he’s lead to his account (this is mostly from being a member of Youtubes “Partner Program,” where people can earn a cut from every thousand times a pre-roll advertisement is shown)

That’s right, he’s earned $7 million, and that’s not even counting endorsements from outside brands. Aside from “Pewdiepie,” the Swedish guy, there’s tons more of these Youtube “influencers” or “celebrities” who are banking serious dough for basically being themselves on camera.

One way those influencers can make even more money is when brands approach them for product endorsements. Those Youtubers with a million subscribers will be able to command a higher price for these endorsements than those who have 100,000 subscribers.

That’s where Toronto and Santa Monica-based FameBit comes into play, which announced this week that it raised a $1.5 million seed round from Science, 500Startups, DeNA, Machinima founder Allen DeBevoise and others.

FameBit acts as a middle-man “bounty” platform, where brands can find, hire, and work with influential YouTube content creators for product and service endorsements. Brands will request an endorsement, which gets posted to the Youtuber opportunity stream, and from there for the over 3,000 Youtubers of varying influence (by amount of followers, and thus reach). A brand can request a full-out product review or something as small as a “brought to you by” post-video reminder.

The company’s founder David Kierzkowski, who lead his team through Extreme Startups’ fourth cohort and later with 500 Startups as well, told me that when brands post an opportunity they usually receive 50-60 proposals within 48 hours. The amount of money that the influencer earns averages at $315, but “we have brands that will spend $10-15,000 on a video, it really all depends on the reach of the Youtubers,” he told BetaKit. “So if you’re hiring a Youtuber with a million, two million subscribers, you’re going to pay a premium.”

But FameBit is actively going after the “long-tail market,” or basically the lower-volume influencers who can collectively make up the same amount of reach and subscribers as a Youtube celebrity with one million subscribers. What it means is that brands can higher ten Youtubers with 100,000 influencers and still get that million-person reach, without paying the premium of a bigger Youtube celebrity.

“The long-tail talent right now is pretty much neglected by the talent agencies, so we’re focused on providing good, quality opportunities to produce more organic content for Youtube, and those Youtubers are all happy making $250 to $500 bucks and sharing it with their subscribers, its pretty cool,” said Kierzkowski.

FameBit is also earning a pretty nice sum from each of these transactions at 20 percent: 10 from the influencer and 10 from the brand. The money is held in an escrow account on the platform until a video has been produced and released, and the brand is satisfied.

My only worry with middlemen like these is whether eventually brands and Youtubers will just circumvent the platform and deal directly with each other rather than giving up 20 percent (which also makes me wonder if an inevitable lowering of FameBit’s cut is in the cards). With sites like Airbnb, we’ve already begun to see cases where the platform is only acting as the technology that enables renter and rentee to meet each other, only to completely avoid Airbnb’s service fees. Once a brand and an influencer have eachother’s emails, what’s to stop them from just dealing with each other the next time the brand wants a placement?

Ease of use and a frictionless experience will certainly lessen the chances of this, and it looks like the startup is well on its way to earning a comfortable living.