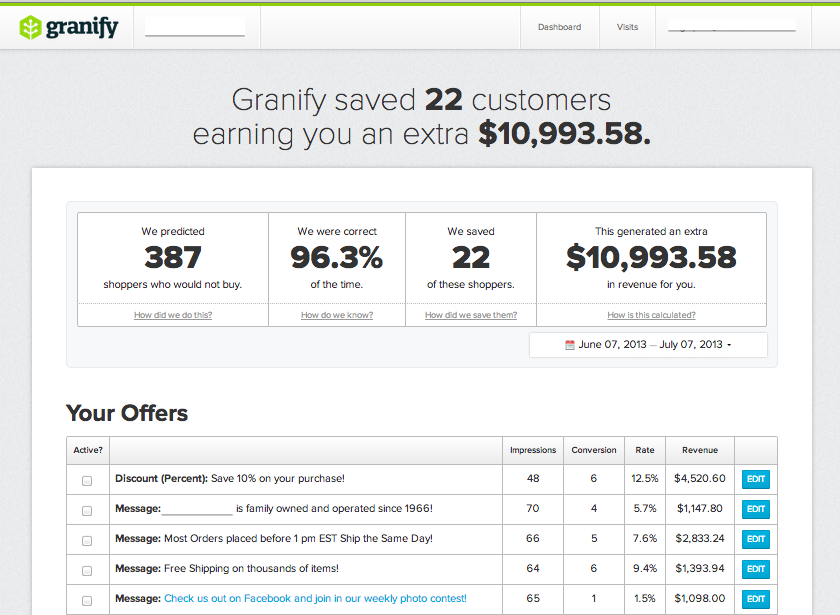 “If you’re like most online stores, you analyze only a handful of data points about your shoppers. And you’re probably analyzing this information after they’ve already left your site. Don’t feel bad, it’s humanly impossible to distill much more than this, let alone do it in real time,” explained CEO Jeff Lawrence in a release. “By letting our big brained computers do the heavy lifting, we’re able to analyze the entire firehose of data- over 400 data points per second- to determine which shoppers won’t buy, the reason and how to change their mind.”

Granify is already processing over 5.3 billion data points per month, which helps it figure out whether the online shopper will buy.

The company emphasized that “it’s not just about couponing”. Sometimes it’s as simple as reminding a shopper about the store’s return policy. Until now, such advanced technology has been prohibitively complex and expensive for the vast majority of online retailers. “Granify is empowering every e-commerce company to achieve the same conversion performance as the Amazons of the world,” said Kevin Swan, Principal at iNovia Capital.

At Lawrence’s Extreme Startups demoday pitch in 2012 he said that while 18 percent of online shoppers end up buying something on Amazon, for other sites the number is as low as two percent.

Thiel’s partner at Valar Ventures, James Fitzgerald, went as far as saying that Granify is solving “a key problem for a trillion dollar industry.”

“They have pent up demand for their product, are already driving a ton of value for their customers and this is just the tip of the iceberg,” he said.

Granfiy is free to try for two weeks for ecommerce sites, and the sites guarantees users will earn five dollars for every one they give Granify. That’s quite the guarantee. Their software also integrates easily with any online store, regardless of platform.

Small business owners seem to prefer Scotiabank above all other Canadian banks, but overall satisfaction among these customers is lower, mainly due to fees….