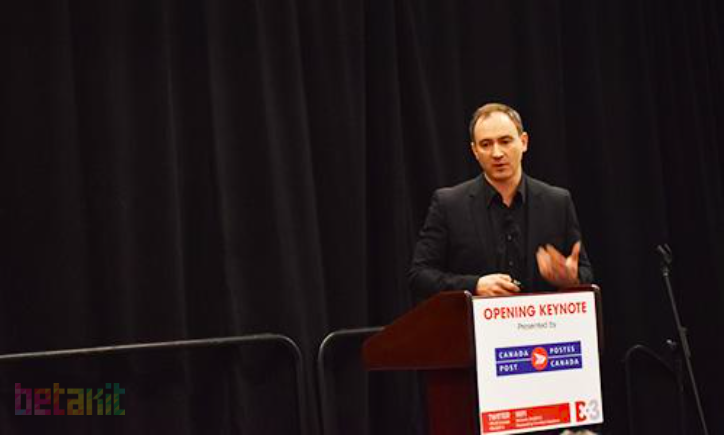 In 2009, however, Serbinis was the founder of a little-known Toronto startup called Kobo, which he sold in 2011 for $315-million. “Like many startups, we had these grand aspirations and sales forecasts that our investors thought were complete bullshit,” he says to the audience. “We forecasted $30-million in sales in our first year; instead, we did about $110-million.”

Kobo was not the first time a company Serbinis had a hand in wildly exceeded expectations. More than two decades earlier, he left the cold climate of Canada to join Zip2, a Silicon Valley-based company that was co-founded by a then-unknown Elon Musk and his brother, Kimbal Musk. The two sold Zip2 to Compaq for $307-million USD in 1999.

In other words, Serbinis knows a thing or two about building unicorns, and at Dx3 he was there to share his insights. According to Serbinis, all of the successful companies he’s worked on have had four common traits.

In 2000, Serbinis’s first company, DocSpace, predicted that in the near future people would want to store their documents, pictures and videos not on their computer’s hard drive, but on the cloud. Creating a cloud-based app — and persuading users to adopt that app — is relatively straightforward in 2015.

It’s clear he believes that the downfall of many Canadian companies is that they don’t think big enough.

In 2000, however, Google hadn’t even filed its initial public offering. The Internet was a very different place, and many of the web-based technologies and solutions people depend on today were only in their infancy. But that didn’t stop Serbinis and his colleagues. They built one of the first cloud-based file storage platforms and parlayed it into a $568-million exit.

Returning to his earlier refrain, Serbinis told the audience that his attempt to solve a hard problem was the first thing that connected all his ventures. “Hard is risky, and with risk comes fear, and nothing is as exhilarating as fear,” he says to the Dx3 audience. “If you’re capable, you have a responsibility to solve difficult problems.”

Later in the presentation he adds, “If you’re not changing the world as a startup, it’s time to move on and do something else.”

Serbinis then calls on an unlikely source, Christopher Nolan’s Inception, to illustrate his next point. Quoting Leonardo DiCaprio’s character, Dominick Cobb, he says, “There are some people who live in a dream world, and there are some who face reality; and then there those who turn one into the other.”

He tells the audience that part of what inspired him to start Kobo was simply thinking about the future and asking himself questions like, “What happens when books go digital?” and “What will happen to traditional book publishers and bookstores when books are sold digitally?” The more he thought about those questions, the more he became convinced that the simple of act of allowing consumers to purchase and consume books digitally would have a transformative effect on the book industry.

In hindsight, it seems obvious — of course it makes sense to sell books online — but, in 2009, most book publishers didn’t see a future where the sale of ebooks were going to be a significant part of their revenue. In fact, a week prior to launching Kobo, Serbinis traveled to New York City to meet with executives from publishers such as Random House and Harper and Collins, and what they told him was that he was pursuing a pipe dream.

Six months later, when Kobo was well on its way to making $110 million in its first year, their tune changed.

For Serbinis, so much of being an entrepreneur is tied to dreaming what the future might look like, and making the conscious decision to be the person that makes that dream into a reality.

Serbinis’ next point was one he spent a brief amount of time on, but it was easy to tell it was also something he thought was crucial. He doesn’t say it in so many words, but it’s clear he believes that the downfall of many Canadian companies is that they don’t think big enough.

He tells the audience that Kobo had several opportunities to tailor and improve its product specifically for Canadian users, but without exception Kobo always decided in favour of doing things that would increase the company’s chances globally.

“Every decision that you make that helps you on a local level first ultimately takes away from you being a global force,” he says to the audience.

Each tech vertical only has space for three or four companies, he says, so it doesn’t make sense to focus on the local market. In fact, his latest startup, LEAGUE, perhaps best exemplifies this. In the United States, the healthcare market is worth $3.7-trillion and it’s growing quickly. Many startups would be happy to simply tap into a single market of that size, but LEAGUE, which is a digital health and wellness platform, is going for broke by attempting to service the global healthcare market.

Serbinis’ final piece of advice for the audience was to frame what their startup was doing as a battle between David and Goliath.

As a startup, there are always other companies out there that have larger budgets, a better brand or more customers, but by thinking about how their startup is different, and by turning that difference into a strength, Serbinis says it is possible to be successful. His suggestion was that startups need to create a culture by design, and a culture that promotes winning.

“The missing link in Canada is that culture of winning,” he says. “It’s what is keeping us from the bigger, brighter version of ourselves. But it’s something that can be taught, and it’s a pattern that can be repeated.”

A mobile app that can allow any flat surface to act in a tap-sensitive manner has won the $1,000 University of Toronto 2014 Mobile…