The year was 1994. President Clinton delivered his first state of the union address and Ace of Base was at the top of the charts with their timeless hit, “The Sign”. It was also the year the Quick Response Code (QR) descended upon the world. QR codes originally served the purpose of tracking automobiles during manufacturing. Today, they are ubiquitously used in print advertising, forming a digital marketing bridge via a smartphone scan.

Are people scanning these things?

Yes, but some of them aren’t placed very intelligently.

A study by Comscore reported that there were over 14 million US QR scans in June, 2011. That might sound like a big number, but when you divide it by the number of QR codes in circulation and consider the sheer number of smartphones out there, that 14 million is not so impressive (less than 20% scan rate). Having said that, European adoption of QR code scan rate has doubled over the past year, with Germans ranking as the most avid QR scanners in 2012.

Asserting, “nobody scans QRs” is unfair, as all QR codes are not created equal. I’ve definitely seen some QR codes out there that made me scratch my head. Most recently, I spotted one deep inside a subway station on a poster. Considering that there is probably more Internet access on the surface of the moon than in this subway station, the QR before my eyes served no purpose. Another notable personal experience was witnessing a lonely QR code trailing behind a small plane flying by a beach in Santa Monica (if you think it’s hard scanning a stationary code, try one that’s flying by at 100mph)

A lot of QR campaigns have disappointing results. Companies spend a lot of money on print advertising with the inclusion of QR codes in hopes of gaining insight into popularity based on scan rate. They may even be trying to capture more in-depth data such as age and location. Some will then call the QR campaign a failure due to the low scan rate and swear to never include them on marketing materials again.

But it is not necessarily the technology that is to blame for a marketing campaign’s “failure”. Rather, it’s the strategy used. In the case of QR, there are a few things to be considered when properly planning a QR campaign. In my opinion, there are three very important (and seemingly simple) factors to consider here:

First and foremost, ensure the QR code is strategically placed in an area where your target audience can easily scan it. Another important note on QR code placement would be to make sure the area has Internet access.

Then there is educational piece to the puzzle. In a survey conducted by Lab42, people were asked, “What would make you more inclined to scan a QR?”  The response centered around 3 factors; “having a smartphone”, “knowing the result”, and “how to scan”.  Educating your potential scanners (customers) on the rewards will generate more interest and incentivize them to scan. The final thing to consider when using QR is measurement. Simply put, always track the success of your campaigns, and this includes QR marketing. Make sure you set expectations and goals for the QR campaign and track efficiency as it runs.  Use Google Analytics and other marketing tools to help track visits, social demographics, and more. Remember to measure things that elicit a behaviour, and always be learning from your customers.

“I think a QR code is one of those really useful technologies that has some amazing potential as a tool for marketers, but falls short in terms of usability and contextuality,” said Adobe’s John Lopez.

If It Makes Sense For Your Brand, Go For It.

So what’s in store for the QR code?  That’s a tough question, as QR codes are not for everybody.

If you have something interesting to say, a product or service to advertise, host a mobile-optimized site, and can reward the customer in some way, then I say go for it. It’s refreshing to see companies and brands, like Starbucks, Heineken and Mercedes Benz leverage this mobile technology successfully. These companies are seeing success because they are using QR in a way that makes sense for their brand and their customers.  In summary, QR, if used properly, can be a unique, interactive way to bridge the gap between your brand and your audience. 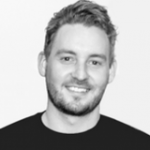 Jimmy studied science at the University of New Brunswick, focusing on Psychology and Biology. After graduating in 2007, he spent over 2 years in the field of education, partly spent teaching at his former High School in Miramichi. Jimmy then ventured back to Fredericton to begin working in the technology sector. Right away, he developed a keen interest in online media, digital marketing, and communications. His time spent at Radian6 and Salesforce Marketing Cloud allowed him to grow his skills in customer communications, account management, and public speaking.