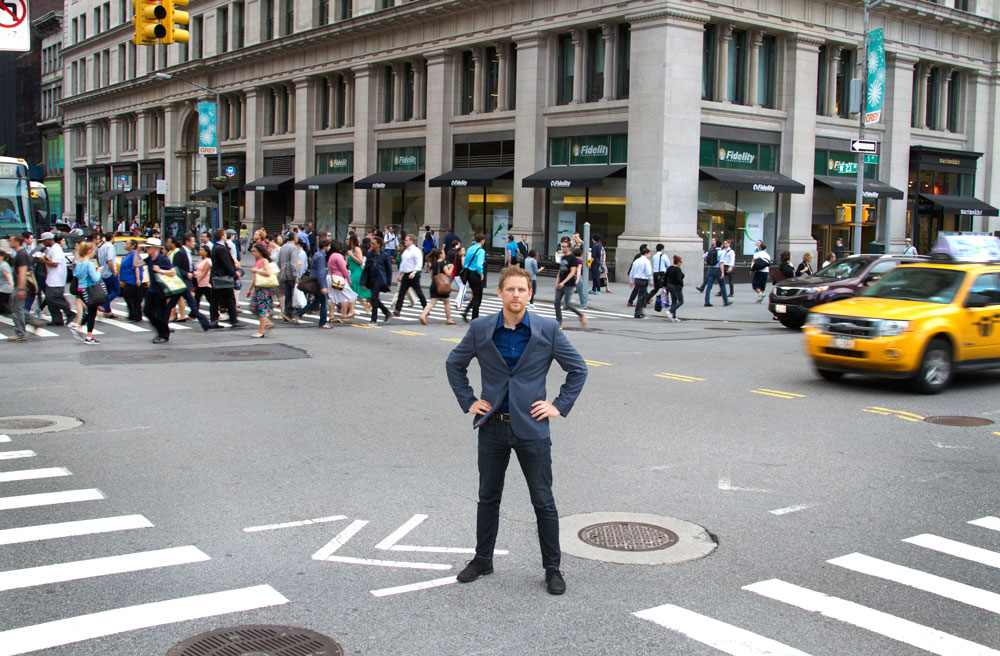 The effort in making TEDxVancouver a sold out success following a one year hiatus was both notable and admirable. The spread of ideas on the surface is nice. But inspiration without action is little more than a stylistic endeavour. The purpose of these dispatches is about highlighting two people who are turning ideas into action.

It was thinking about the relationship between people (individually and collectively) our space, and built environments that motivated this conversation with Happy City author Charles Montgomery. It’s envisioning a post-combustion engine, congestion free, non- pollutant spewing transportation grid. It’s future where people not cars claim primacy to the urban experience. This is an idea worth turning into action.

Borrowing lessons from the ancient world, he writes about how Athens captures a human-centric approach to design. “The city was more than a machine for delivering everyday needs; it was a concept that bound together Athenian culture, politics, mores, and history… Anyone who did not concern himself with public life was himself less than whole” (p.19).

Looking at our 20th century car-centric design thinking and urban planning, the detrimental societal and environmental effects are on full display. There’s nothing social about meltdowns in gridlock. There’s also nothing sustainable about a melting planet.

Asked about a future for the self-driving car, and the potential that a vehicle will simply become a node on a distributed transportation grid, Montgomery thought “it’s an exciting possibility.” He added, “because of the errors, the catastrophe of modernist city planning throughout the 20th century that many existing neighborhoods, particularly on the fringes of cities simply can not support public transit.” Something that simply looks like a human driving an expensive automated bus isn’t going to improve a system of infrastructure built for yesterday.

“At the same time I think that the tech fetishes out there fail to see that traffic and congestion are a natural occurrence in vibrant thriving cities,” he pointed out. In other words, having driverless cars is not going to solve the problem of congestion. Montgomery said “as along as individuals insist on traveling alone in their vehicles whether they are driving or a computer is driving, they’re going to get stuck in traffic.”

He thinks, “driverless cars will be useful, even as part of the public transit system in helping people in dispersed areas access say transit nodes or suburban villages so they can reach high quality, high status shared transportation. Ultimately, it still doesn’t solve the problem of squeezing all of these separate vehicles into the limited space in your thriving central city.”

He reported being impressed with Arlington Virginia as a city that’s creating happier experiences. Saying “they are converting boring, blank, horrid, what some people call car sewers into livable neighborhoods. The subway nodes are surrounded by low and mid-rise with building of shops and services and bars and fun with great sidewalk.”

More impressively, Arlington’s transit authority has dozens of people working on transportation demand management. Montgomery said, “what this means is engaging in the good work of changing hearts and minds.  When we think of cities, movement and technology we keep looking for some holy grail that’s going the fix the problems, when really the biggest issue around transportation is in the firing of our own neurons.”

He doesn’t hesitate saying “we habitually and predictably get it wrong when making decisions about our own happiness about maximizing utility. We all do this everyday in making decision about how to move.”

Public health experts and psychologists are doing robust studies on how moving affects life happiness. According to him, what they’ve found out is “that when people switch from driving their cars to active transportation like walking, biking and even taking transit they get happier. This was a shocker, because most people report in surveys that they don’t like taking transit, and that they feel more fear, rage and sadness than in any other mode.”

We need to envision a system of movement. “It’s a system of life choices that occurs whenever individuals decide to move in a different way, so a transit journey or transit lifestyle isn’t just about getting on a bus. It’s about walking through your neighborhood, and the getting on a bus, and then walking through another neighborhood,” he pointed out.

Coming back to Arlington, “what their commuter services is doing is hacking the minds of commuters in their town. Simply by not showing them data but showing them new stories about how peoples lives are changing when they decide to move differently, that’s all.”

Montgomery said they’re succeeding. “More and more people are choosing to move differently, what that means in Arlington is even though they have tens of thousands of people moving to these new transit neighborhoods there are no more cars on the road. Life gets easier and cheaper for everyone, and the municipality ends up paying less for road improvements.”

As we both call Vancouver home, I had to ask his thoughts about it’s place on the Happy City continuum. “You can see we’re doing many things right,” he offered. “Those of us who are lucky enough to own here get to drink from that sweet fountain. But, it’s false to rate a cities happiness simply on questions of livability. You also have to ask yourself the question of equity, of fairness and the question is really very simple; is your city really happy if most people can’t afford to live there?”

According to Montgomery this is where the city has failed. “We’ve failed to anticipate and deal with the effects that the global economy would have our city and on our lives. I’m talking about affordable housing. The big question for Vancouver is not how we can be greener, but how can we extend the riches of city life to more people who want to live here and to the people who already live here and are being pushed out.”

I’m grateful for the opportunity to write about technology and to share stories about the dynamic people making Vancouver a thriving community. But I also 100% agree with Montgomery when he says “guess what, technology is not going to solve that problem. It means finding new forms of tenure. New ways of owning property that makes it less attractive to speculative buyers, and it means finding new ways of adding supply in our neighborhoods. The kinds of housing supply that again aren’t attractive to speculative buyers. The solution to that problem is policy.”

Technology can be enabling, engaging, and empowering, but will accomplish none of this if it’s not designed for people first. The machine, it’s bits and bites are soulless. More than ever we need to keep humanity front and center in our conversations about technology.

“Whatever creates or increases happiness or some part of happiness, we ought to do; whatever destroys or hampers happiness, or gives rise to its opposite, we ought not to do.” – Aristotle, Rhetoric

Report: Canada has no problem securing patents, but struggles with commercialization

A new study by the Impact Centre at the University of Toronto suggests that Canada doesn’t have a problem securing patents for its inventions;…