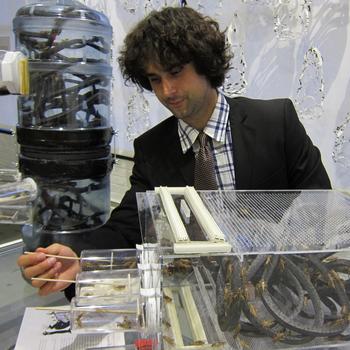 A 31-year-old McGill University engineering student is alleging that his own classmates stole his million dollar idea- the idea which won those classmates the Hult Prize, a prestigious global recognizer for social innovation, handed out by former US president Bill Clinton.

A week after the news came to light though, not much has been heard about who really deserves the prize money.

But Dzamba alleges that he was the one who did all the leg work for his “cricket grinders” in a case of intellectual robbery. The solution breeds insects, like crickets, in micro-farms, and grinds them up into flour to feed people. A recent report by the United Nations Food and Agriculture Organization even notes that insects are eaten by more than 2 billion people worldwide.

The story was propped up in a rather sensationalist manner by a few of the major Canadian news outlets. “It would have been really nice to get to meet Bill Clinton,” Dzamba told the Globe and Mail. “That was kind of a dream.”

Meanwhile The Huffington Post can probably be credited with the cleverest of lines, when its reporter wrote: “Days after a group of Montreal students took home one of the world’s premier awards for social innovation…Jakub Dzamba hears nothing but crickets. Literally.”

Nevertheless, stories like this, if they are completely true, shed light on the unattractive side of the dogged pursuit of intellectual innovation.

The Hult competition’s website calls it the world’s largest student competition to solve social challenges, like helping to feed the urban poor. Along with the seed money, winners receive mentorship and advice from the international business community. More than 10,000 students from around the world typically take part.

Jesse Pearlstein, one of the members of the winning team, told the HuffPo that “McGill University, which values academic integrity and owns the patent, states unequivocally that our business has zero to do with Jakub.”

“The mandate of the competition is to instill business ethics among college and university students in the wake of the 2008 financial crisis,” Dzamba told the HuffPo. “I came up with the wacky idea of using city waste water to farm algae and feeding that algae to insects and grinding insects up into flour and feeding that to people. We did some calculations and it turns out you can feed many, many times more people with that farming method than you could farming any other type of mammal or livestock.”

According to the Globe, Dzamba said a group of McGill associate deans and a commercialization officer decided the team should pay him peanuts, in the form of $5,300 for the work he had done. “But there was a dispute over a release statement, which he called a “gag order,” and it was never signed.”

The winning team, including Pearlstein, issued this statement to the media shortly after, but since then not much has come to light.

The winning team also issued a statement on the dispute.

“As of mid-March 2013 we ceased using any of Jakub’s contributions,” it read. “We provided the university with the slide-deck of the final presentation for the Hult Prize and they have confirmed it does not include any reference to the portable cricket farm design described in the provisional patent application filed by the university (with Mr. Jakub Dzamba as sole inventor).

“It is our intention to compensate Jakub for his work as a past consultant and we are happy to give him credit for this contribution (though these contributions were not a factor in our regional win and were not included in our final presentation).”