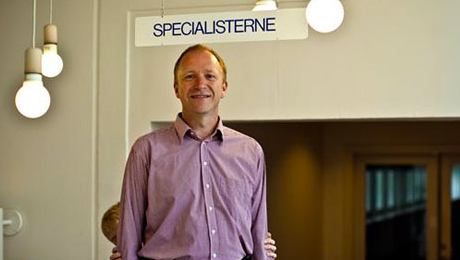 Specialisterne, an international company that helps land tech and IT jobs for people who fall within the autism spectrum, has launched today in Canada.

The company will be headquartered in Toronto and will hold offices in Vancouver and Quebec City. Canada will be the 11th country that the company has expanded to since launching in 2004.

In Canada, Specialisterne wants to land 10,000 jobs through its related IT consulting business and by actively working with corporations and public agencies to train and employ people with autism.

Founder Thorkil Sonne has relocated to Delaware, USA, to lead the Specialisterne impact in North America. He started the company because his son has autism, and has turned it “into a global movement…as a platform designed to enable 1 million jobs globally for people with autism and similar challenges.”

The problem, explained Sonne to the Toronto Star yesterday, is that schools aren’t properly preparing autistic students for the workforce (however the same could be said about modern education institutions for any person, regardless of condition).

Nevertheless, its a talent pool that largely has remained untapped, and as a result, autistic persons remain woefully underemployed. In some potentially award-winning corporate speak, Sonne told the Star that “the ultimate goal is that there will be no need for Specialisterne any more, because our knowledge and views have been embedded in the infrastructure locally.”

The first jobs in Canada — six in Vancouver and four in Montreal — will be in software testing, programming and data quality assurance, part of a pilot program at SAP Canada, in partnership with Specialisterne. Specialisterne will screen and train the employees.

For SAP’s part, it has already hired six people in India with autism, and plans to do the same in Ireland. Canada will be the first North American country where the giant company will seek to continue the trend.

“There is so much opportunity for us in Canada to create meaningful and productive jobs for the growing number of people diagnosed with autism,” Sonne said in a release issued this morning. “There is clearly a readiness and excitement here and we are confident that the combination of our operational experience from 11 countries, and a very strong and dedicated team in Canada, will bring about the sort of change that will benefit all stakeholders.”

SAP’s Kirsten Sutton added that the plan holds much more than altruistic motivations. “We have already seen through successful pilot projects in India and Ireland how the employment of people with diverse talents, including people with autism, can offer us a new way of thinking and bring value to our business,” she said.

The company also urged that the socio-economic benefits of employing people on the autism spectrum are compelling for governments as well. A recently published impact analysis on Specialisterne in Denmark “showed more than 2 times return on investment measured in welfare savings, taxes generated and other contributions,” resulting in an actual annual value creation totalling several millions of dollars to the state.

Report: Women’s entrepreneurship on the rise globally, partly thanks to Canada

Women’s entrepreneurial activity is on the rise globally thanks in part to improvements in Canada, according to Global Entrepreneurship Monitor. The report was developed…