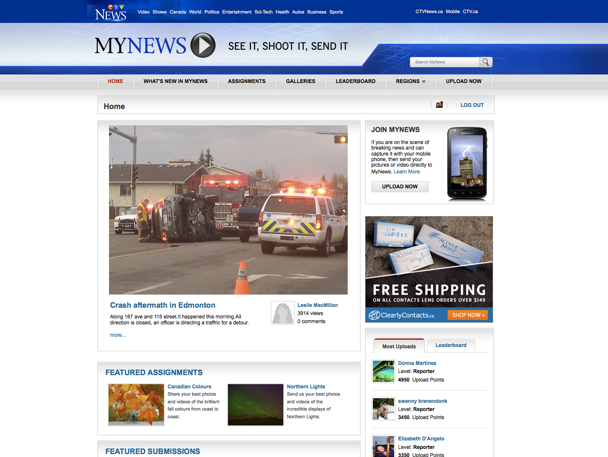 CTV, the Canadian television network owned by BCE Inc., has created a new app with Toronto-based startup Filemobile that will allow ordinary citizens to “take user-generated news to the next level”.

The CTV My News App allows viewers to capture and share photos and videos with CTV’s “MyNews community“, which is a subsidiary website devoted to user-generated news, likely touched up by the company’s staff of journalists. Since 2008, more than 45,000 users have generated more than 14 million pages, according to CTV.

“There are approximately 27 million cell phones in Canada and most are cameras as well. MyNews lets us  tap that tremendous pool of potential eyewitnesses to breaking news,“ said CTV’s Mark Sikstrom. “Filemobile’s technology allows us to efficiently gather, sort, and publish the thousands of great submissions we get every month.”

Its a smart play on CTV’s part to try and take advantage of the close to 30 million Canadians who possess mobile phones, and it’s not a new concept. Among major Canadian news outlets though, CTV seems to be one of a few who are leading the pack in this regard.

The first Canadian media outlet dedicated to gathering “community-powered news” and allowing professional reporters to follow through was the now defunct OpenFile.ca, which was prevalent in all of Canada’s major cities. It was a fantastic idea created by journalist Wilf Dinnick, that generated solid content written by talented journalists across Canada. (OpenFile was one of the first legitimate news outlets that I was published on, two years ago). Unfortunately the site ran out of money and shut down in late 2012.

CTV, on the other hand, has a strong financial structure and looks to take advantage of the millions of ordinary Canadians who know about those elusive news stories that no one else does.

Filemobile’s Steve Hulford said the ability to see where their news audience is and ask for geographically relevant content “ushers in a new era in citizen journalism.”

“We are excited to be working with CTV News to push the envelope of what is possible with user-generated news,” he said.

How Interac keeps innovation flowing from the Lab to HQ

When Interac was founded over 35 years ago, it came to market with a simple idea: that Canadians should be able to access their…