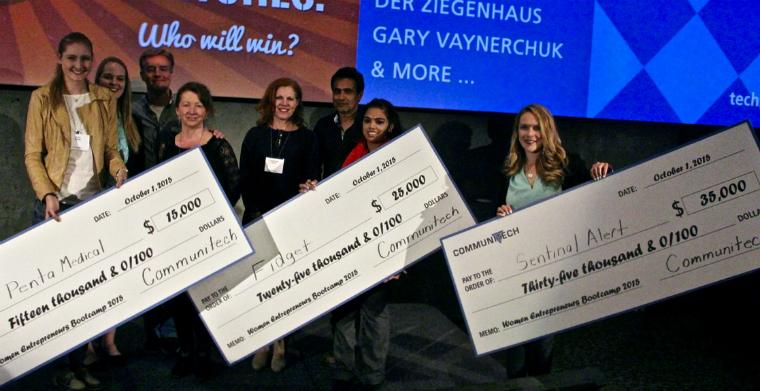 “This is putting money where your mouth is.”
– Gayemarie Brown

According to Communitech News, first place ended up going to Sarah Murphy of Sentinel Alert, an app that helps prevent workplace injuries; Renishaki Kamal of Fidget, which develops tools for children with autism, won second; and Alexa Roeper received third place for Penta Medical, a company that uses laser therapy bandages to speed up orthopedic recovery. The remaining five finalists were each awarded $5,000.

The top three winners have also been invited to spend a week with the Deloitte d { } (dee space) team at the Communitech Hub for product development and research help.

“This is putting money where your mouth is,” said Gayemarie Brown, the national innovation leader at Deloitte Canada and a competition judge, of the programming and of Deloitte’s financial support for the boot camp. “This is real. I can mentor, show up and judge, but [these women are] our future. Our future is bright.”

InnoCité MTL, an accelerator focused on smart city startups, is merging with the Centech incubator. Launched in 1996 by the École de Technologie Supérieure,…