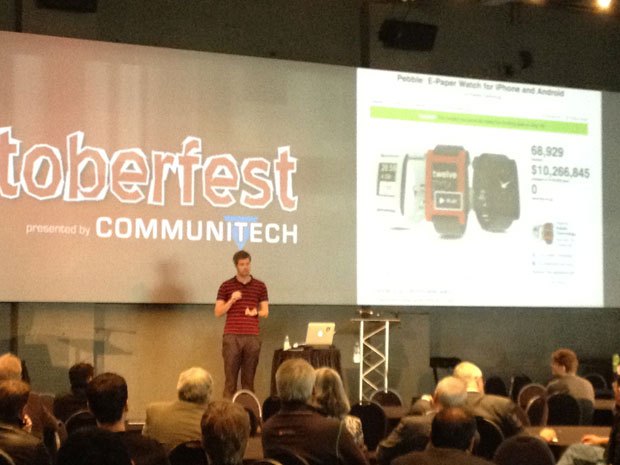 The Waterloo-based Communitech innovation hub is set for a couple exciting months, with the announcement of both “Techtoberfest” as well as the Kitchener-Waterloo Startup Weekend.

The bigger event might be Techtoberfest, Communitech’s October celebration of entrepreneurship, which will feature several high-profile speakers in the Canadian tech space, as well as a bit of “beverage consumption”.

Communitech’s Andrea Harding explained to BetaKit that it used to hold a celebration called “Entrepreneur Week,” similar to Techtoberfest. Unfortunately it didn’t attract as many patrons from outside the Kitchener-Waterloo area. “So we thought if we hold the event at the same time as Oktoberfest we can offer some great night life and extra activities,” said Harding. “With this idea Techtoberfest was born – an event for startups, investors and entrepreneurs to get together, listen to some keynotes, do some networking and enjoy some festivities as well.”

Speakers include a few tech heavyweights who have built business and are known for delivering insightful talks. Those include Alexis Ohanian, cofounder of Reddit, Jeff Hoffman, cofounfer of ColorJar, Stephen Lake, CEO of Thalmic Labs and SalesForce’s Daniel Debow.

Ohanian delivered a keynote at last year’s Techtoberfest as well, while Hoffman is well known for his lively talks about his work encouraging entrepreneurship in all over the world, most recently in post-revolutionary Egypt. Lake and his team at Thalmic Labs developed the MYO armband, and the former Y Combinator leaders in human-computer interaction also raised a $14.5 million series A round in June.

And what could any event that ends with “…toberfest” be without a little socializing? Techtoberfest will conclude with a fun after-party as well. Single-day tickets cost $35 while $50 will get attendees in for the full two days. Those interested can sign up here.

Entrepreneurs can look forward to a Communitech event much earlier though, as the innovation hub will be hosting the Kitchener-Waterloo Startup Weekend later this month, September 20-22.

Startup Weekends, part of a global movement that has swept through cities in more than 100 countries, are weekend-long, hands-on experiences where entrepreneurs and aspiring entrepreneurs can find out if their startup ideas are viable. On average, half of Startup Weekend’s attendees have technical or design backgrounds, while the other half have business backgrounds.

Beginning with open mic pitches on Friday, attendees bring their best ideas and inspire others to join their teams. Over Saturday and Sunday teams focus on customer development, validating their ideas, practicing Lean Startup methodologies and building a minimal viable product. On Sunday evening, teams demo their prototypes and receive valuable feedback from a panel of experts and a winner is announced

The non-profit organization is headquartered in Seattle, Washington but Startup Weekend organizers and facilitators can be found from Mongolia to South Africa to London to Brazil.

Video: Hurrier is the Toronto-Based “Uber for Goods”