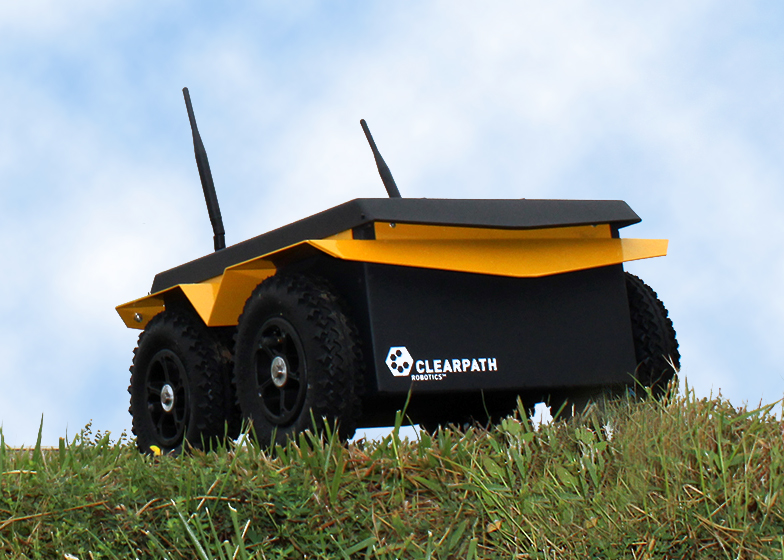 Kitchener-Waterloo based Clearpath Robotics announced today that it has raised a $14 million CAD Series A round from RRE Ventures, with participation from iNovia Capital. The company also announced that RRE co-founder and managing partner Stuart Ellman will join Clearpath’s board of directors.

The funding follows a $360,000 angel investment in 2010 that allowed Clearpath to pivot from mine-removal to producing unmanned vehicles to help researchers inspect and map dangerous environments. Clearpath is famously the first robotics company to sign on with the Campaign to Stop Killer Robots, and in speaking with co-founder and CEO Matt Rendall, it was clear that the ethical production of robots was still a guiding factor for the company.

“The value proposition has always been rapid prototyping.”

“The starting point is just making sure that you talk about it,” Rendall said. “I was watching a video for a drone startup last week that’s basically an Uber for aerial photography. So you can basically call a drone to spy on your ex-girlfriend, and that doesn’t sound very ethical.”

“The example that’s more immediately relevant to us,” he continued, “is that when you’re talking about robots, the discussion is around robots stealing jobs. And so it’s important for us to understand what kind of jobs are actually being replaced.”

Clearpath will use the funding to expand its lineup of unmanned vehicles to tackle dangerous jobs in industrial and manufacturing facilities – essentially jobs that humans that shouldn’t be doing, and are currently extremely expensive for them to do. It’s an expansion of the company’s core business that Rendall indicated Clearpath was uniquely suited to quickly tackle. “The value proposition has always been rapid prototyping,” he said. “And that value proposition we’ve been selling for the last five years has led to a pretty compelling internal capability when we look at developing new systems.”

Rendall also admitted that Clearpath’s Series A round was well below that of some competitors in the robotics space, he was also quick to add that this was “very strategic,” stating that Clearpath’s current profitability and speed of development meant the funding was only needed to accelerate expansion into a hot space. Rendall was also clear that Clearpath’s choice of funding partners was carefully considered.

“We know that the market is growing so quickly, and in order for us to continue executing on our vision we’re going to need to continue to raise capital,” he said. “And the type of capital necessary to really do the big vision in robotics is beyond the type of capital typically available in Canada. So, for our Series A, we wanted to bring in a U.S. partner who could help us tap into much larger capital reserves as we grow our business. But at the same time, it was important for us to have a Canadian partner to help us understand the Canadian landscape and plug us into relevant networks.”

As a venture that emerged from the University of Waterloo, Rendall was able to speak to the continuing development of the Kitchener-Waterloo region as a hardware cluster. “I think a lot of comes down to the University of Waterloo introducing the mechatronics engineering program. UW was the first Canadian university, if not North American university, to introduce such a program.”

“The hardware of the future is not just mechanical – it’s a highly integrated mechanical, plus electrical, plus software, plus cloud service – it’s a highly connected device. The hardware that is beginning to cluster in Waterloo is very much mechatronic systems, and so the talent that’s graduating out of the University of Waterloo mechatronics engineering program has the skills necessary to build connected devices, so that’s where you get Thalmic Labs, and BufferBox, and Clearpath Robotics.”