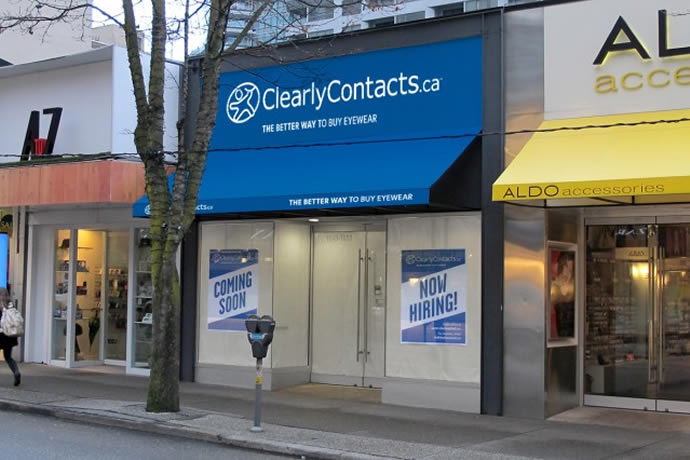 Before answering his phone call, I was pretty tired. But Roger Hardy, CEO of ClearlyContacts.ca and its US sister site CoastalContacts.com, along with dozens of other properties around the world, has a knack for making you feel excited about what he’s talking about.

We were chatting about the new sub-1000 foot retail store the company just opened in Vancouver, its second this year alone. Unlike most shops, this one is more like a pop-up feature, a sample of a much more spacious experience. But instead of a warehouse somewhere in Richmond or Mississauga, this one is located online. In 2012, the company became the world’s largest seller of eyewear online, and is projected to broach $225 million in revenue for this calendar year.

“We’re pretty proud of what we’ve accomplished,” says Hardy, inviting me to share his enthusiasm. “It’s really a true Canadian success story.” The company began in Yaletown, a neighbourhood in downtown Vancouver, in 2000. Initially the company only sold contact lenses — hence the name — but expanded to be a vertically-integrated provider of eyewear as well. The company owns manufacturing and distribution facilities in Vancouver, Stockholm and Sydney, and can save customers between 50 and 70% over the equivalent pair from a store like Lenscrafters or PearleVision.

Indeed, the company that owns both of those companies, Luxottica, along with top brands like Ray-Ban and Persol, does not scare Hardy. “Customers that buy from Clearly[Contacts] are, on average, three times happier than those who buy from Lenscrafters,” he tells me. Clearly has a generous return policy, and encourages customers to buy two or three pairs online and keep only the one(s) they want. It’s a model that’s caught on in fashion, too, with Montreal-based Frank and Oak providing a similar service for mens’ clothing. “Luxottica are in a scary spot,” implying that people are becoming increasingly comfortable buying health and wellness products on the web.

The retail stores offer just a taste of the hundreds of brand name and equivalent “generic” models on Clearly’s website, but they are meant to be a portal to a vast network of choice and customer service. The company has 150 full-time phone operators who speak 17 languages, and users can upload a picture of their face to “try” a particular pair of glasses before they pull the trigger.

Coastal also has a plan for mobile, though its rollout has been slower than expected. “Mobile is a winner-take-all platform,” Hardy explains. The first step is to accomplish small, specified tasks, though eventually they’d like to bring the entire personalized shopping experience to mobile. At the moment, the company offers the ability to upload a photo of oneself taken from his or her phone to be used as that comparison picture. Companies like the aforementioned Frank and Oak have proven that the shopping experience can be optimized for native apps and smaller form factors, but it takes a lot of work and plenty of discipline.

“We think Canada is under-penetrated for buying online today,” but more people are going into retail stores and using that raw data to inform online purchases. To that end, these retail stores are the consolidation of that experience, keeping activity within the same “ecosystem” so to speak. “The proposition value [of a retail store] is very positive,” Hardy continues, “because it helps us understand what customers are saying about the products.