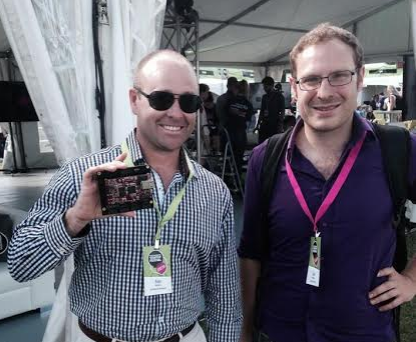 Jason Ernst said that when the leaders of Montreal’s FounderFuel accelerator program asked them for their investor deck within 24 hours, they had a problem.

They had never even put one together at the time.

It was just under a month ago and the Ernst, 29 and cofounder Tom Hummel, 28, had made it to the International Startup Festival after their peers at the University of Guelph’s The Hub incubator encouraged them to make the trek to Montreal.

During the festival’s first night, the pair ended up at a networking event for startups and investors, and tried to talk to as many investors as possible. It seemed to work out for them after a chat with a Real Ventures investor.

The pair founded Redtree Robotics, a company that is creating a mobile robotics platform including hardware, software and communications computers for mobile robots. “Other companies have a single robot for a single task and every time they want to readapt it to a new application, they usually have quite a bit of work recruiting and reprogramming things,” said Ernst. “We’re trying to develop something that allows you to change the application very easily.”

It’s designed to be able to add censors, actuators and motors into a robot’s programming very easily, in a plug and play fashion. It’s also designed for multi-robot applications, said Ernst. The software is focused on making the data flowing between the robots very easy, and maintaining the connectivity of the robots.

Hummel had worked in various position within industry in between stints in academia. “His job was really integrating sensors into other robotic things and he found that he was always doing the same work over and over again when there should have been an easier way to do it,” Ernst told BetaKit. “I come from wireless network research, so that’s where the multi robot and communication parts of it come from, just things that I’ve experienced in my research.”

Back at the International Startup Festival, the pair continued talking to FounderFuel brass and were eventually told that they had a good shot at winning the FounderFuel Fast-Track award, where one startup would be granted admission into the program. They won.

Now the team is ready to hit the FounderFuel accelerator in full stride once September comes. With the program’s new funding structure, they’ll likely collect $100,000 in exchange for an equity stake, along with the $150,000 convertible note from the BDC. Not bad to suddenly have $250,000 to work with.

RedTree Robotics will sell their their platform for $5,000 to big industrial automation companies looking to move into mobile robots. “So they might have static robots that don’t move around a lot, and it makes it easier than finding a team and having to develop it all on their own,” said Ernst. They said they haven’t made a sale yet, but they’re pretty close to their first one.

For now its a race to get their dissertations finished to the pair can head to Montreal come September.

What #Budget2019 got right for Canadian tech

Federal Finance Minister Bill Morneau tabled the 2019 Federal Budget on Tuesday March 19. Overall, it was a positive budget for the Canadian tech…